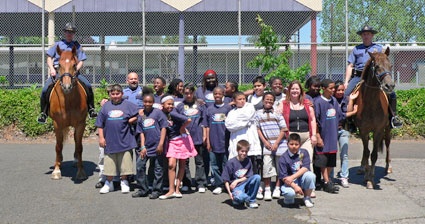 With all the bitter debate about police accountability in Portland that has roared to the forefront of media headlines over the past few months, little ink has been spilled covering the Portland Police Bureau's many community service projects.
However the federally-funded G.R.E.A.T. (Gang Resistance Education and Training) Program – arguably a cornerstone of the bureau's youth violence and community outreach efforts – is facing massive defunding in Congress' 2011 budget.
"It's small money compared to building bombs or building jails or putting the kids through the justice system in a bad way," says Sgt. Frank Gorgone, a G.R.E.A.T. instructor.
"Having us come into the classroom costs next to nothing."
The Portland Police Bureau operates the national organization's western regional training center, which serves 10 states and has provided structured education in life skills for almost half a million elementary and middle school kids.
In the Portland area, about 3,000 youths and pre-teens have graduated through the program for each of the past 16 years.
Sen. Ron Wyden has taken up the cause, lobbying members of the Senate Appropriations Subcommittee to restore national GREAT funding to the tune of $20 million.
Wyden, in a March 3 letter to Senate Subcommittee Chair Barbara Mikulsi , D-Md., and ranking member Sen. Richard Shelby, R-Ala., acknowledged that G.R.E.A.T.'s funding was cut due to a "lack of data" on the program's effectiveness.
He argues that a long-term study on the program is scheduled for completion in 2012.
"Already, preliminary results of the study show that youth participating in G.R.E.A.T. demonstrate lower rates of gang membership, lower rates of self-reported delinquency, and more positive attitudes towards police," Wyden wrote.

Volunteer Force
Gorgone says the heart of the program involves a volunteer crew of about 45 Portland police officers who take on the task of teaching a highly-structured 13-week education program in local schools and community centers – on top of their regular 40-hour-a-week patrol duties.
"It's not always been supported –we've had people over the years in command places in the past that would undermine us going into the classrooms -- they would make it harder for us to do it," Gorgone says.
"If anything the people that do it -- isn't helping their career, it hurts it because it's cutting into their own time, and it's not always considered by other cops the thing to do," Gorgone said.
Officers are assigned to teach at schools in the areas where they patrol.
"It absolutely helps the way we can police on the street – because it all crosses over," he said.
In 2002 the program expanded to include whole families in the trainings, with the goal of improving communication skills between parents and their kids.
"The whole goal of the families program is to take a family no matter how they're functioning and just strengthen them and hopefully bring them up a notch in their family relationships," Gorgone said.
One of the things built into the families' curriculum is that the officers and the families share a meal every week. "So we all break bread together, they end up asking questions, we end up getting to know each other," Gorgone said.
Officers wear civilian clothes until the last of the program's six sessions, Gorgone said, making a point of building one-on-one relationships that transcend the gun and the badge.
"What we try to do especially with the immigrant community in the Cully neighborhood, we're letting them get to know police officers in a totally different way," he said. "Most of them have no real firsthand experience with us."

North Precinct Commander Jim Ferraris, the G.R.E.A.T. representative serving on the group's national policy board, traveled to Washington D.C. earlier this month to lobby lawmakers to preserve the program.
Ferraris visited Wyden, and Wyden subsequently turned up the heat on influential players on appropriations budget committees.
"We are all over the G.R.E.A.T. Program," says Wyden's Oregon Communications Director Tom Towslee.
Meanwhile, GREAT Program graduations are coming up at Ockley Green, George and Portsmouth Middle Schools, and Rosa Park Elementary.
Gorgone says police departments across the nation are trying to draw attention to the G.R.E.A.T. Program right now to galvanize support for federal funding. But ironically, he says, the media's attention is driven by shootings and scandals rather than community policing tools that bring officers into classrooms without their uniforms and weapons.
"There are 45 officers who have been doing this for a long time, and they do it with no thanks -- they rearrange their life to do it," Gorgone said.
"Everybody that does it, it's done out of passion for no other reason than they enjoy doing it."