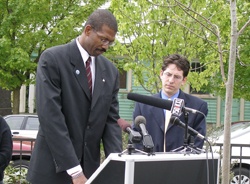 Former Trail Blazer Michael Harper and Matt Wingard, director of the school choice program for Cascade Policy Institute, discuss the institute's report on Jefferson High School during a news conference Tuesday. The report says that, despite numerous reforms at the high school, thousands of students have graduated unprepared.

Jefferson High School is the target of a report by the Cascade Policy Institute, which blasts the Portland Public Schools for establishing numerous academic reforms over the past several years that have failed.

As a result, the report says, "perhaps as many as 5,000" students have been passed through the Jefferson Cluster "without the ability to read, write or do math at a high school level."

At a news conference Tuesday, representatives from the Cascade Policy Institute and from the Black Alliance for Educational Options called for more "school choice" for parents and students in the cluster that includes the elementary and middle schools that feed into Jefferson High School.

Cascade Policy Institute is a self-described Libertarian nonprofit educational and research organization that focuses on issues important to Oregon.

Although he did not specify what they meant by "school choice," Matt Wingard, director of the policy institute's school choice program, said it should be "something that wouldn't be what the district has tried."

Former Trail Blazer Michael Harper, who also is a member of the Black Alliance for Educational Options, said students living in the Jefferson Cluster have fewer places to turn to for an education than those in other Portland neighborhoods. Harper, whose children do not attend schools in the Jefferson Cluster, said parents are demanding changes in North and Northeast Portland.

Known as a magnet school for the arts since the 1970s, Jefferson has long been home to the Jefferson Dancers, a nationally known student dance troupe. During the 1970s, the school also offered intensive training in video production.
About two years ago, Jefferson divided into two schools, the School of Champions and the School of Pride. A year later, a freshman academy was created. The philosophy behind the changes was that students would achieve their academic goals in smaller schools where they would receive more individual attention from teachers. The Portland school district also wanted to attract more students; this year about 655 students out of a potential student population in the area of 1,950 attend Jefferson.

But the school is facing even more changes. The school board decided earlier this year that Jefferson will be divided into three academies — a co-ed Arts and Technology Academy and a co-ed Sciences and Technology academy, both serving grades nine through 12; and a Young Men's Leadership Academy for grades seven through 12. The leadership academy will open with a ninth-grade program next September.

Other changes are in store for the feeder schools, including a Young Women's Leadership Academy for grades seven through 12 at what is now Harriet Tubman Middle School.

When asked if the Cascade Policy Institute wanted to see Jefferson closed, Wingard said only that parents and students should be given more choice, including charter schools.

Wingard said the Cascade Institute was interested in working with the Jefferson community to find other educational options. He noted that the institute is inviting educator Dr. Howard Fuller to Portland to talk about the effect that educational "reforms" have on minority neighborhoods.

The founder of the Institute for the Transformation of Learning at Marquette University, Fuller is the board chairman of Black Alliance for Educational Options. He will speak from 7 to 8:30 p.m. Tuesday, May 23, in the Emmanuel Temple Church, 1033 N. Sumner St.

For more information about Fuller's visit or the Cascade report, call 503-242-0900 or visit www.cascadepolicy.org.