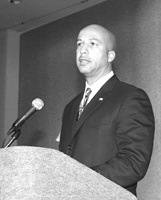 NEW ORLEANS--The race to guide New Orleans through one of the biggest urban reconstruction projects in U.S. history -- rebuilding after Hurricane Katrina -- will be between two familiar candidates: Mayor Ray Nagin and Lt. Gov. Mitch Landrieu.
Nagin earned a comfortable lead in Saturday's voting with 38 percent or 41,489 votes, but short of the majority needed to secure a second term as mayor without the May 20 runoff. Landrieu had 29 percent, or 31,499 votes. Nonprofit executive Ron Forman followed with 17 percent, 18,734 votes, and 19 other candidates trailed far behind.
The election was a tricky experiment of modern-day democracy that gave voters scattered by the hurricane a say in this city's future.
Despite the high stakes -- the municipal leadership will make key decisions about where and what to rebuild in a city where whole neighborhoods remain uninhabitable -- turnout was low, roughly a third of those eligible.
Of the city's 297,000 registered voters, tens of thousands are spread out across the United States. More than 20,000 cast ballots early by mail, fax or at satellite voting stations around the state, and thousands more made their way to 76 improvised polling stations. Some traveled by bus or in car caravans from such evacuee havens as Houston, Dallas and Atlanta.
"Let me tell you something. This is an important election," said Geraldine Miller, a 61-year-old stroke patient whose daughter was pushing her in a wheelchair. "We're going to straighten this mess out." After the results were tallied, Nagin took a jab at critics who had discounted him because of his missteps during the Katrina crisis and for an outspokenness some saw as divisive."There have been too many people who said we were dead, too many people who said we were way too divisive. There were too many people who said this city should go in a different direction. But the people have said they like the direction," Nagin said.
Landrieu, flanked by his father, Moon Landrieu, the last White mayor of New Orleans, said his showing was testament to the unity the city needs after a storm that put all of New Orleans "literally in the same boat."
"Today in this great American city, African American and White, Hispanic and Vietnamese, almost in equal measure, came forward to propel this campaign forward and loudly proclaim that we in New Orleans will be one people," he said. "We will speak with one voice and we will have one future."
Race is a key factor in the election. Less than half the city's pre-Katrina population of 455,000 have returned, and civil rights activists note that most of those scattered outside the city are Black. Prior to the storm, the city was more than two-thirds Black; it has not had a White mayor since 1978 when Moon Landrieu left office.
The Rev. Jesse Jackson has said he plans to challenge the election outcome in court regardless of the winner, arguing displaced voters were disenfranchised because they weren't allowed to vote in polling places in such adopted cities as Houston, Dallas and Atlanta.
Of the ballots cast prior to Saturday's election, about two-thirds were cast by Black voters, but analysts caution the numbers may not reflect overall turnout. The racial breakdown of the full vote was not immediately released.