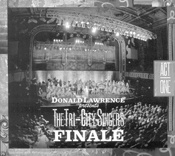 After two decades and countless achievements, Donald Lawrence stands as one of the pre-eminent figures of Gospel music.

In a career filled with landmark moments, none stands higher than Lawrence's 15-year collaboration with what began as a 35-voice, Carolina-based community choir known as the Tri-City Singers.

In existence since 1981, and known to the world since its 1991 partnership with Lawrence as Donald Lawrence presents the Tri-City Singers, the ensemble has had a major hand in defining the Gospel choir of the 21st century, while also becoming one of the genre's most successful and beloved acts.

The convergence of people, place and time that birthed Donald Lawrence & the Tri-City Singers comes to a conclusion with the choir's farewell offering, Finale.

The album was recorded live in November 2005 at The Tabernacle in Atlanta, Ga., with all proceeds donated to provide relief for musicians in the Gulf Coast states ravaged by Hurricane Katrina. The concert's two-plus hours of music is divided into two double-disc sets — Finale: Act I and Finale: Act II. Each set contains an almost equal measure of Tri-City classics and new material — on both CD audio disc and DVD. 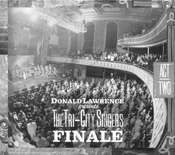 Finale features a host of celebrated guest artists — among them Walter Hawkins ("Seasons"), Daryl Coley ("When Sunday Comes"), LaShun Pace ("And Yet I'm Still Saved") and Vanessa Bell Armstrong, Karen Clark-Sheard and Darwin Hobbs — each sharing in a deeply moving, 12-minute rendering of "It's Your Time." New, live renditions of other Tri-City trademark songs include "God's Favor," "When the Saints Go to Worship," "Never Seen the Righteous," "I am God," "I Walk With the King" and more.