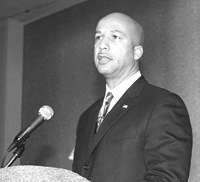 NEW ORLEANS—Mayor Ray Nagin and Louisiana Lt. Gov. Mitch Landrieu both suggested during a nationally televised mayoral debate that race played a part in the response to Hurricane Katrina.

Race, said Landrieu, "is the most difficult issue we're facing in the city."

He and Nagin appeared with five other prominent candidates in a debate Monday hosted by cable network MSNBC and New Orleans NBC affiliate WDSU-TV. The primary election is Saturday.

Landrieu, the son of a White mayor credited with opening City Hall to Black professionals, said issues of race and poverty were ignored for years, but Katrina forced them to the forefront.

Nagin, who, unlike in his first campaign, has seen growing support from Black voters, said he had difficulty during the aftermath of the storm getting officials to respond to stranded residents until he began to talk about people who were being thrown out of hotels and into shelters during the chaotic days after the Aug. 29 storm.

Nearly two dozen people will appear on Saturday's ballot, but those invited for the nationally televised debate — extraordinary for a municipal election — are the most watched in the race. If a candidate wins more than half the votes on Saturday, he or she wins the election, but a run-off between the top two finishers on May 20 is likely.

NBC had judged that the debate would draw enough interest to warrant airing it coast-to-coast. Too, displaced New Orleans residents are still spread across the country.

With less than half of the city's 455,000 pre-Katrina residents back in the city, the outcome of the election is unpredictable, but most political observers expect Nagin to advance to a runoff against Landrieu or Forman.

Forman said he did not believe race was a factor in the response after the storm. The failure of the city to offer good public education, housing and jobs before the storm was the problem, he said.

"What we saw was the poverty come out because we haven't had good leadership for 20 years," Forman said.

Nagin,Formanand Landrieu were allies going into the race and have been hesitant to criticize one another openly until recently. But the attacks on each other's records have gotten more pointed in the waning days of the campaign.

During the debate, Forman was given a chance to question Landrieu, and he charged that city and state leadership had been failing before Katrina hit on Aug. 29. "What have you been doing for 20 years?" Forman asked.

Landrieu shot back, saying he's been working on ethics issues and helping to develop the state's tourism business, including securing money for the Audubon Institute, the nonprofit Forman has been credited with growing into a major institution.

Nagin, meanwhile, tried to stake out his place as the incumbent, to remind voters that he was here throughout the storm and aftermath. "I've been here, and I have a plan," he said during the closing of the debate.

Roughly 300,000 people are registered to vote in New Orleans, but the outcome of the election is expected to hinge largely on turnout and race.

More than 16,000 ballots have already been cast by mail or at satellite polling places set up last week in New Orleans and elsewhere in Louisiana. Of the ballots cast, two-thirds were by Black voters, according to the secretary of state's office. About 31 percent were White.

The breakdown so far is roughly the same as the city's population pre-Katrina. The racial breakdown of voters has been closely watched by election officials and civil rights groups who say Black voters could be disenfranchised because many lived in sections of the city that remain uninhabitable because of the extensive damage.

Elliott Stonecipher, a political and demographic analyst, said the early ballots cast do not necessarily reflect the overall turnout because civil rights groups and others concerned about disenfranchised Black voters were the most active in mobilizing early voting.

"It doesn't tell us a thing. It's interesting. It's nice to know," he said. But he believes it's unlikely the final racial breakdown of voters will parallel past years.