By Brian Stimson of The Skanner News
Published: 04 February 2010 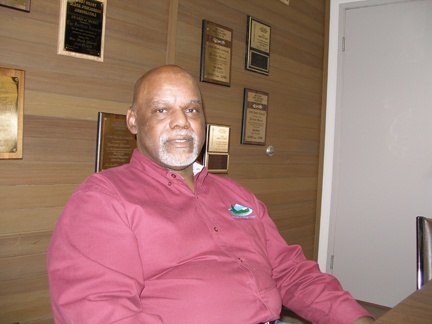 After nearly seven years serving on the board of the Housing Authority of Portland, Commissioner Lee Moore has now been elected board chair. Moore sat down with The Skanner News to talk about his vision for HAP, how he's come full circle and why he believes the New Columbia model can be replicated.

The Skanner News: What motivated you to take on the position of the chair of the board?

Lee Moore: I was supposed to take it on last year, but I had just started with Clackamas River and Water, so we delayed that until this year. The reason I got involved in the Housing Authority initially is because of the work they were doing with New Columbia. They needed someone with some with a little bit more construction experience. I agreed to sit on the board, and after seven years, we needed to rotate chairs, it seemed an appropriate thing to do.

TSN: What do you hope to accomplish as board chair?

LM: The chair has some leadership responsibilities, the executive director, for example, reports to the chair. Even though he works for the board, the board is the legislative and policy board of the agency. I see this is a legacy position for me. When my parents came here, during the '40s, we stayed in Vanport, that's where I was born. We stayed in what was essentially government housing, then the flood occurred and we moved into government housing. Then we moved into University Park, which was government housing, until my parents saved up enough money to move into our first home in 1950.
We're involved in some initiatives now, one being, Moving to Work, getting our tenants, where possible, to go from government assisted housing to homeownership. As I reflected back on that, my parents made that transition, so for me it's coming full circle, so I can give back.

I've acquired a lot of expertise in construction, and management, I've done a lot of volunteer work throughout my career. At some point you have to give back. My mother always said that we have a responsibility to pay for the space we occupy, pay for the space for those we are responsible for, and give back to the community.

TSN: It seems to me that New Columbia is a good example of a mixed development, where homeowners and renters lives side by side, providing an example of how one might go from government assistance to self-reliance. Is this a model that works?

LM: Portland has an interesting legacy in housing. My parents couldn't buy their own home, they had to have a friend who was Jewish buy the property and then deed it to them. Vanport was actually created because a lot of people in the city didn't want poor people, Black or White, from the South, invading the city. Oregon's second largest city was created because many in this community didn't want to allow the socially disadvantaged, even though they were here for a social purpose, to intermix with the locals. Columbia Villa, when I was young, was White only. It wasn't until the late 50s that Columbia Villa became integrated. The whole idea of creating economic ghettos was something that the Housing Authority had – long before I came on the board – began working on. We have a large Section 8 portfolio, which is another attempt to integrate. That's one thing I like about Portland, there is no exclusive community. That makes Portland the richer. The New Columbia development was an extension of that. We want everyone to look at that new community and be able to drive through and it would not be obvious who was poor, for those living in apartments to those who were middle class. I believe New Columbia has satisfied that objective.

TSN: Is it possible to replicate the New Columbia model in other communities? There is the feeling among some people that living in public housing is a stigma.

LM: We won't know if the NC experiment works longer term. As a Housing Authority, we have to ensure it does succeed. With NC, you had a blank canvass. We tore down 83 acres and created a new environment. Then we move to Humboldt Garden, which we also tore down, but because of limited ground space, it was not possible to replicate (NC). At Hillsdale Terrace (in Southeast Portland), where we do have a high concentration of lower income, we also need to make sure that the type of housing we provide is quality housing. The whole Hillsdale Terrace issue has to do with what's there now is substandard housing. It's not where you live, but how you live. It's in serious need of improvement. We need to make sure our developments are not ghettoized by lack of quality of the facility.
Both the properties over at Multnomah, the National Guard facility that the city is looking at now, I think that is an opportunity that we can, if the city asks us to, that it could lend it to a mixed use, blended community.

I think we can begin to take some of our experiences and look regionally. Are there ways we can do blended development so we're not creating economic ghettos? We have to be careful about what we take to the suburbs. As the price of land in Portland increases, we don't want to be the San Francisco of the north. A lot of people are beginning to move to the 'burbs; we need to make sure the suburbs of today aren't the ghettos of tomorrow. We need to make sure those are planned activities so the surrounding communities aren't bearing the brunt of low-income housing. We also have to be careful we don't try to Portlandize the suburbs. There are different dynamics and needs that the suburbs have that we don't have in the city. Portland, over time, in order to accommodate the influx of people, has to grow vertically. Suburbs are going to grow horizontally. We're going to have to be a heck of a lot smarter. We have to be viewed as a resource, if we ever hope to be successful.

TSN: How has federal stimulus money changed the thinking at HAP?

LM: I think we need to look beyond that. We're beginning to engage in a 6 month strategic planning effort. One thing on the agenda is, what are the issues, what do we need to be doing and what's the best way to be doing that? We've been creative. We've done some partnering. The Morrison on Burnside, one tower is condos for middle class, one is low-income. We're doing the RACD (Resource Access Development Center) downtown, multi-off street housing for those who are less fortunate, that also offers a multitude of services. We are beyond this ideal that every public agency can do everything. We need to answer … Whose job is it to do what? We need to bring the leadership of all these constituencies together and figure that out. The public shouldn't be funding multiple agencies to do the same thing. There are also private agencies doing all these things.

TSN: I recently wrote an article about a woman living in Humboldt Gardens who experienced an excessively cold apartment. She even had frozen pipes in December. How often do board members speak with tenants about problems like this?

LM: All the time. I've even gone out to visit residents. If someone wants to communicate with me, they have free access to me. Our staff is very good at letting us know when there are problems, as they did with this issue with Humboldt Gardens. There were some communications issues at the front end, but once it got to our attention, we inspected multiple units. We had not put enough insulation in that unit, and that happens sometimes. Once construction is completed, you get in and find things that got missed. I think it's unfortunate that this is one thing that got missed. One of the things I wanted to know – the article talked about staff putting in portable heaters – are they going to have to pay for all the electricity use? Staff assured me the Housing Authority was picking up the tab for that, as well as the portable heaters. We ask the tough questions, that's our job.

TSN: Have there been any other construction-related problems in the new buildings?

LM: This was a flat-out oversight, you can't dress it up any differently. But, no, it hasn't been brought to our attention that anything else is wrong with the other buildings we've finished recently. One of the things we're doing with the stimulus money is going in and retrofitting a lot of our aging structures and bringing them up to current code.