A group pushing a ballot initiative to rein in payday loan practices is urging the coming special legislative session to avoid the issue if proposals are weaker than what their initiative outlines.

The ballot proposal sponsored by Oregon for Payday Loan Fairne$$ would limit payday loan interest to 36 percent a year, restrict loan initiation fees to 10 percent of the loan amount, allow only two rollovers and give borrowers 31 days instead of 15 to use the money before the loan comes due.

Oregon now is one of only seven states with no interest cap. 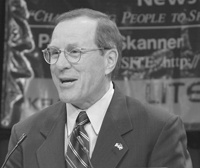 Hundreds of payday loan stores operate in the Portland area, most of them concentrated in low-income neighborhoods. Critics say that the stores prey on uninformed borrowers who often find themselves swamped by interest payments that have ballooned far beyond expectations.

Gov. Ted Kulongoski called the April 20 special session to address school funding and a $136 million hole in the Department of Human Services budget.

It is not clear if payday loan reform will also be on the docket, but the issue has been gaining steam.

Last week, a Senate hearing and a news conference by the group backing the initiative put different faces on the industry, which is banned in three states. Some depicted the industry as one that fills a niche for those seeking small short-term loans. But a disabled woman who needed $150 for orthopedic shoes described being sucked into a payment and fee vortex that cost her $1,900.

The Oregon Senate passed a regulatory bill in 2005 but the Republican-run House shelved it. The industry gave some $150,000 in campaign contributions to legislative candidates the previous fall, and Minnis and House Majority Leader Wayne Scott got $25,500 of it.

House Republicans denied suggestions that the contributions led to the bill's demise, and Minnis now says the special session should address the payday loan industry.

At Thursday's hearing, Luanne Stoltz, owner of Anyday's Payday Loans in Portland, said people who use the service "make an informed choice and know what the service will cost."

Stoltz claimed no state has restrictions as stiff as those in the initiative. If it passes, she said, it would doom the industry in Oregon, putting almost 1,000 people out of work and forcing people seeking short-term loans to Internet loans, pawnshops or illegal sources.

She said the fees her company charges work out to 469 percent a year, but said the short-term cost is low compared to bank overdraft charges or utility bill late fees.

Mark Thompson, in charge of government relations for Moneytree, which operates in several states including Oregon, said most financial institutions can't make money on small loans, and the loan companies of previous years have gone into real estate lending.

He said the payday loan industry has filled that niche.

Lenders depend heavily on fees generated by the loans, he said, and predicted that the ballot proposal would cut payday industry profits by 70 percent.

"Show me an industry that can survive that," Thompson said.

Absent the industry, he added, more people will turn to car title loans, leading to repossession and lost jobs.

But Maryann Olson, who said her income is $7,723 a year, related borrowing $150 when she found she needed orthopedic shoes.

After the maximum three 15-day roll-overs, in which a loan is renewed if it cannot be paid, she owed $176.47 and didn't have it.

"I had $150 but they wouldn't accept it," she said. So she took another payday loan to cover it and wound up in a cycle where she had eight loans outstanding, each taken to cover an earlier one.

She said the checks she left as collateral were sent to the bank in rapid-fire repetitions, resulting on overdraw fees of nearly $900 in two months.

Rev. Mark Knutson of Portland's Augusta Lutheran Church, said the businesses in Oregon make about 2,000 loans a day.
He said it is true there is a need, but the poor need fair lending practices.

"Every day we see more people struggling to make it," he said. "The last thing they need is a loan with exorbitant rates."
Cory Streisinger, director of the Oregon Department of Consumer & Business Services, said the number of such businesses has doubled to 360 since 2001 and they made about 750,000 loans in 2004.

She said there are Internet loan companies operating out of Grenada and elsewhere that tap the wages of late payers, a practice illegal in Oregon.

"If the loan is legal where it is made, it is exempt from our reach," she said.

Streisinger recommended capping the total that can be borrowed and establishing a database system to monitor outstanding loans to see that caps are not exceeded by use of multiple lenders. As it stands, she said, there is a "safe harbor" provision limiting payments on any one loan to 25 percent of income.