From Sports Park to Aquarium, Vision for Portland Memorial Coliseum Redevelopment Is Vast 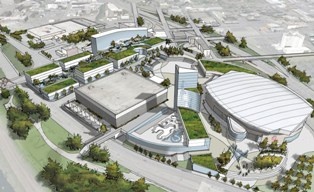 A rollercoaster. A business park. An aquarium.
Last night, dozens of architects, designers and visionaries presented their plans to convert the Memorial Coliseum into something they believe will better suit the city's needs.
Of the roughly 94 concepts submitted to the Rose Quarter Stakeholder Advisory Group, dozens appeared in person at the Coliseum Tuesday night to publicly show off their blueprints for a brighter, better Rose Quarter.
Whether it was for redesigning the interior of the glass box to fit office space, an indoor water park, museums or music halls, nearly all presenters were obsessed with finding something that was uniquely "Portland."
One presenter even wanted to build a working replica of this city, where visitors could lower the bridges and control the trains.
"We are the premier miniature builder in the world," said a representative of the SMARTT company.
Bringing in a constant flow of patrons into the area is also on the minds of most of the visionaries. Kevin Cavenaugh of Team 2+3 wants "sexiness in a space" with a modular version of Montgomery Park inside the glass box. Cavenaugh says it could be a "city in a building," but if that sounds boring, don't worry, "that's the least sexy part of it." 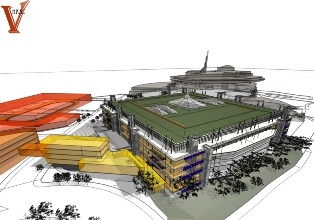 How to make the Rose Quarter a vibrant district like others in the city is a matter of opinion.
Sean Michael Riley would like to see a rollercoaster wrapping around the district, no matter what is decided to be done with the Coliseum and surrounding grounds.
Charles White and Kayse Jama imagine a district that reflects the city's diverse populations, where old people can mingle with young people, neighbors can shop, and low-cost housing and a boutique hotel sit side-by-side. This idea and several others would honor the Black and Native American populations that were displaced when the Coliseum was originally installed.
Many others see a center dedicated to the region's sports enthusiasts. The Action Sports Complex wants a wave pool, skate parks, rock climbing and kayak streams. "Activeeation" sees rock gyms, an indoor waterpark and a 5,000 seat coliseum – not to mention golf simulators, a 10-plex theater and a virtual reality ride that takes you across Portland.
Tricia Tillman wants a hanging garden.
Matthew Miller wants an arts and athletic center.

Gold Star Mothers wanted it to better reflect its supposed purpose -- a memorial to veterans.
And in the end, many of these people might get at least a portion of their idea incorporated into the final plan, says Amy Ruiz, planning and sustainability policy advisor for the Mayor Sam Adams. On Jan. 29, each visionary will need to have a qualified development team to advance. The city is helping amateurs link up with professional developers so their ideas aren't muted.
"We only have a finite amount of public resources," Ruiz said. "It needs to be a public private partnership. We need someone with access to funding to complete the project."
Those visionaries without qualified development teams haven't lost though – components of their plans will be evaluated one by one by the Rose Quarter Advisory Committee for the efficacy and demand in the community.
"That will promote the best and brightest ideas and integrate the ones our community wants most," she told The Skanner News.
The end product might very well be a hybrid of a project sponsored by a well-funded developer, such as the Trail Blazers. It could also be a project with several design teams partnering with the city to create a new Rose Quarter.
The next Stakeholder Advisory Committee will be held from 5 to 7 p.m. on Feb. 9 at the Portland Development Commission offices, 222 NW 5th Ave. to evaluate concepts.