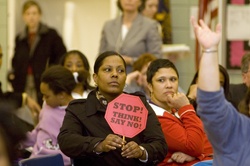 Shouts, anger and accusations punctuated a meeting at Humboldt Elementary School Monday night, when Portland Public Schools officials asked the community to respond to a proposal to close the school.

Over 100 parents, students, teachers and community residents attended the meeting, which was mostly a nonstop shouting match. At the center of the storm were three issues: the adult video store across the street from Ockley Green Middle School, where Humboldt students would attend; the academic achievement scores, which are lower at Ockley Green; and the deteriorating structure at Ockley Green compared to Humboldt, which is rated much better.

While the district's chief operating officer Cathy Mincberg tried to explain why the school is being closed, she was constantly interrupted by questions and comments.

Pressured by an ever-shrinking district budget and school enrollment at almost half of what it was 35 years ago, the school board is considering closing seven of the district's 85 schools over three to four years and converting 17 schools to a kindergarten-through-eighth grade model.

Although the original proposal submitted by district Supt. Vicki Phillips called for the closure of Humboldt next fall, the ever-changing target date has been extended to give community residents and district officials at least 15 months of planning time before the school is closed, Mincberg said. 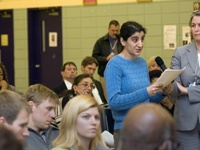 Humboldt fourth-grade teacher Rose Michels, standing, with papers, weighs in at the meeting.

During the two-plus hours meeting, parents asked district officials how they would protect young children who had to walk past the Fat Cobra adult video store on North Interstate Avenue on their way to Ockley Green. Mincberg, who said she had discussed the issue with Portland City Commissioner Randy Leonard, admitted that Oregon freedom of speech laws prohibited the city from shutting the store.

Flanked by people holding signs asking why the district is moving children into dilapidated and unprepared buildings, other audience members praised the Humboldt building and asked why Ockley Green students couldn't attend Humboldt. They were told that more than $1 million in repairs would be made to Ockley Green and that the community may decide to move the play structure at Humboldt to the Ockley Green campus.

According to an analysis prepared by the district, Humboldt, built in 1959, is in the best condition, and its roof is expected to last another 10 years. The 46,865-square-foot building costs $2.91 per square foot to operate.

Built in 1925, Ockley Green needs a new roof and boiler, and it doesn't meet federal standards for handicapped accessibility. However, it has been reinforced to withstand earthquakes and it is relatively safe if a fire occurred, according to the report. The 71,937-square-foot building costs $2.95 per square foot to operate.

"How is putting us into a 'dead' school going to improve the situation for Humboldt?" asked one parent.

Mincberg replied that Humboldt still had some work to do to raise scores and that the development of a K-8 school would stabilize relationships between teachers and staff members and children and improve discipline problems, which, in turn could improve the scores that usually drop in middle school.

Suggesting that Humboldt become the K-8 school instead of Ockley Green, fourth-grade teacher Rose Michels said it would be easier for the younger students to travel to Humboldt, that there are enough classrooms to hold the students and that enrollment will rise with the redevelopment of the public housing complex nearby.

"The Jefferson cluster has had so many divided decisions made that it is time for the school district to stick to its word," Michels said. "Many parents have lost faith in their child's future in the public school system, and the families with the least amount of resources seem to be at the receiving end of a bad deal."

Mincberg called the proposal a "plan in transition" that would probably undergo further changes. She noted that the planning time had been extended from the original proposal and that several school board members were sitting in the back row, hearing the audience's concerns.

"The plan is different today because some listening is going on," she said.