By Brian Stimson of The Skanner News
Published: 14 January 2010 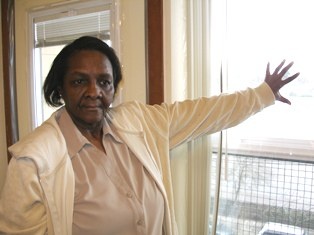 As a Chicago native, Sylvia Dollarson is no stranger to cold winters. But when Portland first went into a freeze in December, her apartment wasn't holding heat, and her pipes froze. She was alarmed.

Dollarson's residence, located in the year-old Humboldt Gardens public housing complex at North Williams Avenue and Alberta Street, is a corner unit on the fourth floor. She holds her hands to the thick plastic she's used to cover the brand-new double paned windows and tests the tension of the air filling the space.
"That's minor," says the retired 67-year-old.
Then she walks over to the patio, where a steady draft blows under the door.
"And this is without the wind blowing," she says.
She's covered the edges in duct tape to prevent the cold air from getting in at a gap near the bottom – despite threats from the building's management that she may be charged if the tape leaves gummy residue when she moves out.
She says she's been keeping her thermostat at around 80 degrees to keep the apartment at a steady 64.
The first time she complained, maintenance put a lining around the patio door frame that did little 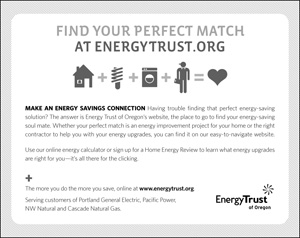 to address the problem. Two days later, the pipes were frozen.
"It was just ridiculously cold," she said. It's been so cold she's been staying extra hours doing volunteer work at Portland Community College to avoid going home.
The next time she complained, the managers – contracted by Portland Housing Authority – said she wasn't properly locking her windows. She says the windows weren't installed properly.
"I'm from Chicago, tell me about keeping a locked window," she said. "They treated me like I was an old trouble-making woman."
Every night she goes to bed early, with a heating pad, a microwaved towel, a quilt, a blanket, and a comforter.
But HAP spokesperson Shelley Marchesi said the agency has been doing its best to correct the problem. There was a changeover in management due to unrelated contractual changes, she said, and HAP employees are now directly managing the Humboldt Gardens property.
Sometimes, Marchesi says, it can take an investigation before a problem is located.
In the case of Dollarson's unit, it was a physical construction problem in the property, which is awaiting approval for being LEED Gold certified. LEED certification is the nation's highest environmental standard.
Project Manager Julie Livingston said the original contractor, Walsh Construction, was called out to fill in spray insulation in the roof above Dollarson's unit. She said they are currently investigating to find out if other areas of the building lacked insulation or other structural problems related to weatherization.
Dollarson said other neighbors are experiencing similar issues, but are afraid to speak up.
"I'd really like to encourage anyone that has a similar issue to speak up," Marchesi said.
Erik Fabian, property manager for real estate operations for HAP, said they did have a relatively widespread problem of frozen pipes this winter and are working to limit that. He stressed that residents had at least one source of water during the 36-hour freeze.
Fabian also dropped off floor heaters to Dollarson as a temporary fix.
Livingston said new buildings do have a certain "break-in" period, where construction defects are detected and fixed. Part of the problem with Dollarson's unit – aside from the missing insulation – is the location. As a high, corner unit, it seems to bear the brunt of wind and weather because it's so exposed.
Dollarson says she just wants to see the problem fixed, because she can't afford the increasing utility bills on her limited budget. She likes living in the unit and would like for it to be her long-term home.
"I hope that not only I will be warm, but it will help others in the building to be warm," she said.
Another resident, BJ, who didn't want her last name used for this article, says she has organized a resident's association at Humboldt Gardens to address problems like this in the future.
She believes many residents are hesitant to address problems because they fear losing their public housing status. She has plans in February to meet with management to discuss solutions.
Fabian, meanwhile, says the residents he speaks to are generally very happy with the building and he hasn't received any complaints about the former managers — IPM. He says HAP is extremely pleased with the job IPM did on the building and the management change had nothing to do with their performance.