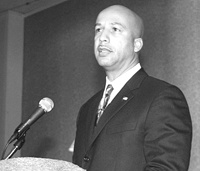 LAKE CHARLES, La.—For Elaine Stovall, getting on a bus for the two-hour trip back to Louisiana to vote for the future of New Orleans was just something she had to do.

"I would have walked to New Orleans if I had to. I would be less than a good citizen if I wasn't out here doing this," said Stovall, 62, a Hurricane Katrina evacuee staying in Houston who traveled 140 miles Monday to vote for the next mayor of New Orleans.

The election officially is April 22, but residents scattered around the country by Katrina will be able to vote all week at satellite voting centers in Lake Charles, Shreveport, New Orleans and seven other cities around the state.

By the end of the first day of voting, about 1,600 had cast early ballots, including nearly 1,000 in two New Orleans locations.

"We need to be a part of the political process," said Cara Harrison, an evacuee from the flood-devastated Ninth Ward, who said she voted for incumbent Mayor Ray Nagin at the Lake Charles center.

Evacuees may use mailed-in absentee ballots, but many of the 110 who boarded buses in Houston said they wanted to vote in person because mail delivery in New Orleans remains unreliable.

"This way, I know it will be counted," said Cavada Smith, 50, who lives in a Houston apartment after being flooded out of a New Orleans housing project.

Several voters said they did not expect to return to their hometown before the end of the year, but made the long trip because the election will determine much of the city's future.

Gilda Burbank said casting a ballot reminded her that she still has a say in New Orleans. "It makes me feel that, at long last, something is going to happen. It's the start of getting my life back," she said.

The election was originally scheduled for February but was postponed because of the damage and dislocation done by Katrina.
New Orleans had nearly a half-million people, about 70 percent of them Black, before the hurricane. But fewer than 200,000 have returned, most of them White. Some Black leaders tried to postpone the balloting, fearing the Black community would lose political power.

Federal observers are monitoring the early voting at parish offices in Monroe and Shreveport, the Justice Department said.

Twenty-two candidates are challenging the re-election bid by Nagin, a Black man criticized in some quarters for his response to the hurricane. The challengers include Lt. Gov. Mitch Landrieu and Ron Forman, an executive credited with turning New Orleans' zoo into a national showcase. Both men are White.