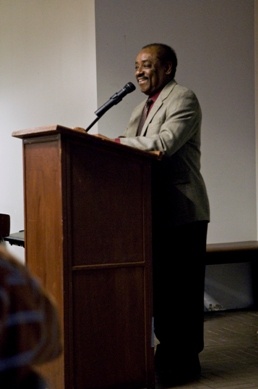 Sitting down to a bounty of collard greens, fresh bread and organic chicken, residents of Seattle's Central District had much to be thankful for on a recent autumn evening. The diners—reflecting a wide diversity of ages, faiths and ethnicities—were celebrating a successful harvest of crops grown on the Clean Greens farm in Duvall.
Clean Greens hosted its first harvest dinner at New Hope Baptist Church in the Central District on Nov. 17 to honor members of the St. Mark's Episcopal Cathedral CSA—a Community Supported Agriculture farming project.
The "green" nonprofit is aiming to increase the local community's access to organic produce and lower the incidence of disease. In its third year of operation, the organization set up the relationship with St. Mark's—a cathedral on Capitol Hill—before this year's planting season and created the CSA.
"Now that we have started this CSA, the farm is sustainable in yet another way," said the Rev. Robert Jeffrey, the pastor at New Hope. "We already use sustainable practices, like not using chemicals, to bring good, clean food to the inner city. But now the farm will sustain with the CSA."
By subscribing at the beginning of a growing season, the 35 members of the Saint Mark's CSA each received a weekly box of seasonal vegetables – such as collard greens, green beans, squash, bok choy and beets -- at prices ranging from $20-$35.
Advocates say that ties the fates of the farmer and consumer together, in that the risks and the benefits of farming are shared. 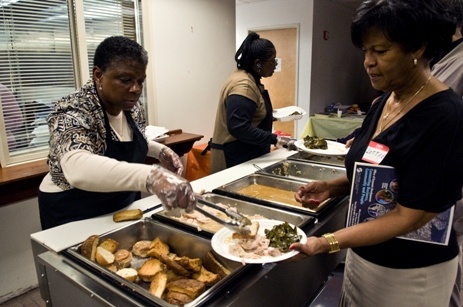 "We like the connection with organic local produce and making a connection with a community that is different from us," said Ruth Mulligan, a Saint Mark's CSA subscriber. "It has been a blessing for us."
Mulligan says it's important to help inner city communities get fresh produce. She described the Central District as a 'food desert," and said its residents have trouble buying local produce.
Jeffrey says that African American society has been moving further from the ideals of George Washington Carver and Booker T. Washington, founders of the Black agricultural and industrial movements.
He advocates a return to the earth and farming as the basis for creating a "whole and wholesome" African-American community.
"There is a stigma associated with farming among African Americans," said Clean Greens head farmer Tom Willis. "Farming treated us badly to begin with, but it is time to get back to it."
Willis runs the day-to-day operations on the farm in Duvall, but he stressed that volunteers from Seattle and the Duvall area really brought the harvest home this year. Willis said the operation struggled earlier in the year during the planting and sowing season because he lacked personnel on the farm.
"There is always something to do on a farm," Willis said to the crowd. "So if you know any farmers, call us up at Clean Greens. I can always tell you how to get free produce."
The program's future is far from assured, and lies in the hands of CSA owners, partners and volunteers. In his closing prayers, the Rev. David Messenbring of St. Mark's was hopeful the effort will continue.
"This has been a good beginning but it had better not be the end," he said. "We should be getting out there and getting our hands dirty with those we don't know. Not staying here and staying clean with those we do know."

Clean Greens produce is available for purchase at the Central District farmers market from early June to late November from 10:30 a.m. to 4 p.m. on Fridays and Saturdays. The Market is located at 116 21st Ave., Seattle WA 98122.

NIKOLAJ LASBO is a student in the University of Washington Department of Communication News Laboratory.