Multnomah County honored some of its most hardworking citizens April 6 when the county health department handed out its annual Public Health Hero Awards. The awards recognize people whose effort and dedication in the cause of a healthy community rise above the ordinary. 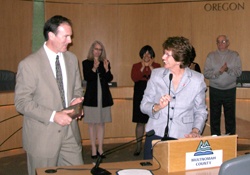 Matt Garritt, left, of Pacific Restaurants, receives the Business Award. Pacific Restaurants — which owns such establishments as Stanford's, McCormick and Schmick's and the Portland City Grill — has voluntarily adopted a company-wide nonsmoking policy in all its restaurants and bar areas.

Téjara Brown, left, and Sarah Marie Benjamin accept their Katie Jeans-Gail Award for Young Heroes. The two are staunch supporters of the School-Based Health Care Program, and completed a "Photo Voice" project with other youth to document health issues in their community.

Grace and Truth Church's Girls Leadership/Peace Campaign receives its Jeans-Gail Award. The girls work to teach members of their community about nonviolent problem-solving methods, and participate in community and church projects that promote cooperation rather than conflict.