Dorothy Rowley Special to the NNPA from the Afro-American Newspapers
Published: 02 November 2009 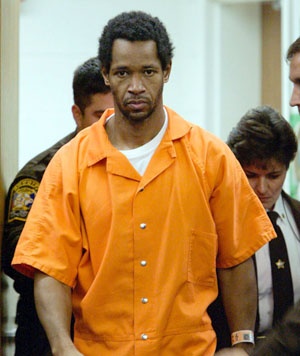 WASHINGTON (NNPA) - It was around this time seven years ago that the Washington, D.C., area was gripped with terrorizing fear.
In October 2002, former Tacoma, Wa., resident John Allen Muhammad, known as the Beltway Sniper, and his teenage accomplice, Lee Boyd Malvo, embarked on a deadly shooting spree. When it was over, 10 people had been killed.
The random shootings occurred mostly at gas stations and shopping malls – one of the critically wounded victims included a 13-year-old boy on his way to school. The shootings began Oct. 2 and went on for 23 days until Muhammad, a Gulf War veteran, and Malvo, a native of Jamaica, were apprehended by authorities – led by former Portland Police Chief Charles Moose -- while sleeping in a car off Interstate 70 near Frederick, Md.
For his part in the massacre, Malvo, now 24, received a life sentence without possibility of parole. But Muhammad, 48, referred to as the mastermind behind the killings, including one that took place in Virginia, is slated for execution on Nov. 10.
There are currently 16 inmates in Virginia on death row and one is female. The average time on death row for current inmates is five years.
Muhammad has filed an appeal to Virginia Gov. Tim Kaine, declaring he was too mentally impaired to represent himself at his 2003 capital murder trial. However, Kaine is not expected to intervene.
Virginia Department of Corrections spokesman Larry Traylor said the last execution to take place in that state occurred just last year. He said Muhammad, who had been housed at the Sussex, Va. correctional facility in Waverly, was moved two weeks ago to the death row center in rural Greensville County.
"We don't go into detail about who will attend [the execution] but some of the victims' family members from all over the country will be there," Traylor said. "We have limited space, so we're trying to make arrangements for as many as possible and give the families the option of attending."
According to Malvo's testimony at his 2006 trial, the purpose of the killing spree had been to "set up a camp to train children how to terrorize cities" and teach kidnapped youngsters how to extort money from the government. The ultimate goal, he added, was to "shut things down" across the United States.
Meanwhile, Muhammad's former wife and their three children have gone on with their lives.
In the process, Mildred Muhammad has written a book, "Scared Silent," which details her life of mental abuse by a manipulative husband and how she learned of his involvement in the shootings. Mrs. Muhammad has also become an advocate for victims of domestic abuse.
Mrs. Muhammad, who was estranged from her husband at the time of the shootings, was not immediately available for comment, but said in a recent National Public Radio interview the couple's son is in college and their daughters are still in high school. None of the children have maintained a relationship with their father, she said.
In that interview, Mrs. Muhammad went on to discuss her husband's violent tendencies, as he once told her he'd like to take a small city and terrorize it and never be apprehended for the crime.
"They would think it would be a group of people and it would only be me," Mrs. Muhammad said, recalling her former husband's comments. When she asked why he would "do something like that," she said he changed the subject.
Mrs. Muhammad, who has since remarried, said during the NPR interview that law enforcement officials told her she had been her husband's original target. They'd mentioned the proximity of her home to numerous sites where her husband and his teenage accomplice had brutally wounded and murdered innocent victims.
"They said, 'Ms. Muhammad, didn't you know he was shooting people around you? The man he shot in the hand with the laptop, that's right down the street from you. The gentleman that was shot at the store in Brandywine — that's two miles away from you. You were the target,'" she recalled.
Mildred Muhammad said during the interview that as a result of his popularity – she described her husband as a man of his word, as well as one who'd established a strong contingent of allies in their community – it was difficult to find support when she discussed her husband's vicious mental abuse with others because no one believed her allegations.
She also said she had known for years that Muhammad wanted to kill her. "It's one thing for someone to say they're going to kill you, but then to see the work that was put into trying to disguise it," she said, "I still have not wrapped my brain around that fact. We were married for 12 years. We had three children.
"I don't understand why he hated me so much to the point where he wanted to kill me. And it would have been one shot right in the head and that was it. Because he was one shot, one kill."