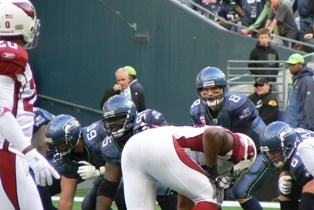 The Seattle Seahawks dropped to 2-4 on the season with an embarrassing 27-3 loss to the Arizona Cardinals Sunday at Qwest Field.
After shutting out the Jaguars last week, the Seahawks stalled and hit a wall as the Cardinals were on the attack early with a 10 minute, 42-second opening touchdown drive, a 2-yard touchdown pass from Arizona quarterback Kurt Warner to receiver Larry Fitzgerald; Warner was 9 for 9 for 64 yards on that ensuing drive. The Cardinals then recovered an ensuing pooch kickoff and before Matt Hasselbeck and offensive could run their first play; the Seahawks were down by 14-0 before getting the ball with a little over 3 minutes left in the first quarter.
The Cardinals defense swarmed Hasselbeck throughout the game sacking him five times. Hasselbeck finished the game 10 of 29 passes for 112 yards and one reception compared to Warner's 32 of 41 passes for 276 yards, one Hail Mary interception and two touchdown passes.
Seattle finished the game with 128 yards of total offense which included a paltry 14 rushing yards on 11 carries, the lowest game total in franchise history.
"We knew coming in it was going to be difficult. We're an inconsistent team right now," coach Mora said. "It was tough obviously, those are not good numbers," he said. "We're not able to install a consistent lineup and we still gotta find a way to do better."
Hasselbeck agreed with Mora saying "Our team has defined that kind of inconsistency. Some weeks we play well, some weeks we don't. You don't know which team is going to show up."
Three time-Pro Bowl middle linebacker Lofa Tatupu may not be out for the season after all and is still being looked at after tearing his left pectoral muscle in the second quarter. Coach Jim Mora said it will be a couple of days before they know the severity of the injury after initially saying Tatupu was out of the season. Second- year player David Hawthorne will step in for Tatupu while D.D. Lewis is the backup.
Seattle heads into their bye week and hopes to return with some healthy players including Marcus Trufant who injured his back prior to training camp, Leroy Hill who has been out with a torn groin muscle and guard Rob Sims who has been out the past two weeks with an ankle injury when they travel to Dallas to face the Cowboys.
"The bye week comes at a great time," safety Deon Grant said. "Hopefully we'll get some guys healthy and I know I've gotta step up my game on defense, the whole defense has to step up so we'll be ready going into Dallas." When asked if they still have a chance at the playoffs and climbing back on top the NFC West, Grant answered "Definitely."
Seahawks fans can only hope.