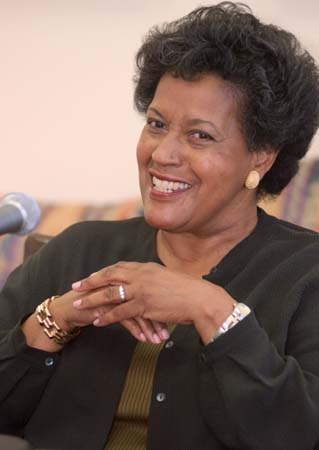 The Oregon arts education organization Caldera has named civil rights icon Myrlie Evers-Williams to its board of directors.
Evers-Williams's career as an organizational leader, writer, public servant, business person, and education and marketing specialist brings a wealth of experience and expertise to Caldera. She also brings powerful inspiration, says Dan Wieden, Caldera's board president and founder, to the underserved children that Caldera supports in both Central Oregon and Portland.
The group's youth program provides underserved Oregon children with year-round, long-term mentoring through arts and nature projects, beginning at age eleven and continuing through young adulthood.
Caldera also grants month-long residencies to professional artists at Blue Lake in the Cascade Mountains.
The programs are in schools and communities in Portland, Bend, Redmond, Terrebonne, Madras, Sisters, and at the group's Arts Center, located on ninety acres of mountain and forest land at the edge of a volcanic lake west of Sisters, Ore.
A field organizer for the NAACP in Mississippi, Medgar Evers was assassinated on June 12, 1963. Myrlie and their three small children found his body by the back door of their home in Jackson, where he had dragged himself after being shot in his driveway.
Two hung-jury trials resulted in no verdict in Evers' murder in the early 1960s; in 1967 Evers-Williams wrote "For Us, the Living," chronicling her late husband's life and work.
In 1994, Evers-Williams obtained enough evidence to reopen the case to a third trial found killer Myron De La Beckwith guilty. He died in prison in 2001.
Evers-Williams was elected to the position of Chairman of the National Board of Directors of the National Association for the Advancement of Colored People (NAACP) in February 1995. With the support of a strong member base, she is credited with spearheading the operations that restored the NAACP to its original status as the premier civil rights organization.
In 1998, Evers-Williams announced that she had successfully completed her mission and would not seek another term. Instead, she would devote her efforts to establishing the Medgar Evers Institute, linking business, government and communities to further human rights and equality.
She has also worked at a New York law firm as vice president for advertising and publicity, and to ARCO, where she served as consumer affairs director. In 1987, Evers-Williams ran unsuccessfully for the Los Angeles city council, where she was subsequently appointed to the Board of Public Works.
Evers-Williams' literary achievements include contributing editor, Ladies Home Journal, where she was one of the magazine's editors who covered the Vietnam Peace Talks in Paris, France. Her articles received wide acclaim. She has written her autobiography, "Watch Me Fly: What I Learned on the Way to Becoming the Woman I Was Meant to Be," released in 1999.
She has continued to preserve the memory of her first husband, including serving as editor on "The Autobiography of Medgar Evers: A Hero's Life and Legacy Revealed Through His Writings, Letters, and Speeches," published in 2005.
Myrlie Evers-Williams was married for 18 years to Walter Williams, himself a civil rights activist until his death, two days after she was elected chairman of the board of the NAACP.