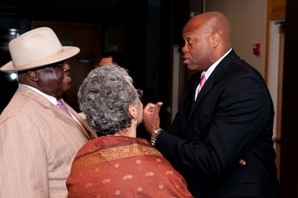 Craig Robinson, who had basketball fans jamming Oregon State University's Gill Coliseum last year, proved to be a big draw himself this weekend in Washington County.
Robinson, hired last year as OSU men's basketball coach, served as master of ceremonies at the Washington County Museum's annual fundraising dinner/auction, dubbed "A Swank Affair" at Portland Community College's Rock Creek campus.
Robinson helped entertain about 230 people who helped raise more than $80,000 for the non-profit museum Saturday evening.
Robinson, who was accompanied by his wife, Kelly, seemed amused by the event's name.
"You know, I've been to a few swank affairs in my day," he said, perhaps alluding to his status the brother of First Lady Michelle Obama. "But this is the first one that called itself a Swank Affair."
Still, Robinson – who was recruited by OSU booster Pat Reeser, of Reeser's Fine Foods in Beaverton -- brought his A-game to the evening, schmoozing, posing for photos and even bidding on a few items.
"Having Coach Robinson was amazing," said Sam Shogren, museum director. "He contributed significantly to the evening."
Shogren said he was thrilled with the turnout and the continued support of major donors such as Reeser's, Robinson Construction and the Beaverton Bakery, particularly given the sour economy.
"With their generous support and the support of many others, this year's gala is at least the second most successful in museum history," Shogren said. "We're still processing donations, and it may surpass last year—making it the most successful in our history."
The museum is located just north of the Sunset Highway on the Rock Creek campus. For more information, visit www.washingtoncountymuseum.org.