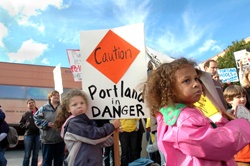 Kaya Porter, 5, right, and Isella Wallace, 4, both students in Humboldt Elementary School's pre-K program, join their parents and other concerned community members outside the Portland Public Schools district offices April 3 to protest the district's ongoing budget difficulties. Humbolt is scheduled for closure within the next three years.

Portland school officials had some good news and bad news for parents this week. The good news: Schools will remain open for the full school year, classes will stay about the same size and curriculum improvements will continue.

But the bad news followed quickly: Seven schools will close in the next three to four years — including Humboldt Elementary School — as the district gradually merges its middle and elementary schools into kindergarten-through-eighth-grade schools.

Public testimony will be taken on the school budget only at a school board meeting beginning at 6:30 p.m. Monday, April 10, in the school district administration building, 501 N. Dixon St. Another public hearing is planned at 6:30 p.m. Tuesday, April 11, in the Gregory Heights Middle School cafeteria, 7334 N.E. Siskiyou St.

More public meetings are planned to discuss the school reconfiguration plan and the budget, but no schedule has yet been published. The board is scheduled to decide both issues on May 1.

Parents attending the school board meeting on Monday were somewhat relieved when they learned that last-minute relief from the Legislature may shore up a district budget that originally contained a $57 million shortfall, but they braced for another announcement scheduled the following day.

That's why parents, students and teachers staged a rally near the administration building prior to Monday night's meeting.
Shouting "Eastside, Westside, Black and White, same struggle, same fight," about 100 people carrying homemade signs marched along the streets near the administration building to demonstrate their opposition to school closures.

Their signs read, "If you're not outraged, you're not paying attention"; "Coming soon to your neighborhood, school closure"; and "Whoa Vicki," referring to schools Superintendent Vicki Phillips, who was set to make the school reconfiguration announcement on Tuesday.

Phillips announced Tuesday that Clarendon, Humboldt, Hollyrood, Rose City Park and Rieke elementary schools and Kellogg Middle School would close in the next three years, as well as one yet-unannounced schoolinthe Sellwood/Moreland neighborhoods.

In addition, Phillips is asking that North Portland residents and the outer Southeast Portland community around Marshall High School meet to determine if the areas' middle schools could improve by a change in configuration.

Phillips said she wouldn't propose closing or changing the high schools but would wait for reforms to occur at Jefferson, Madison, Marshall and Roosevelt to take hold. However, she added, if academic achievement and enrollment do not improve in the next two to three years, "that decision will be revisited."

School board members, who received Phillips' $388 million budget proposal Monday night, are only beginning to wrestle with concrete recommendations. They learned during the meeting that Multnomah County commissioners Lisa Naito and Maria Rojo de Steffey had met with leaders from the state Legislature on Monday to find funding for the schools.

If the leaders' plans go through, the Legislature may meet in a special session to approve $42.2 million in "excess" dollars from the Oregon State Lottery to be distributedtoschools throughout the state; this would give the Portland schools $3 million. The Legislature also could approve funding that would close a gap in property taxes lost with the passage of the Ballot Measure 5 tax reform measure.

Meanwhile, the board happily learned of an unexpected increase of $9 million in increased revenues from the district's share of the State School Fund for the 2004-2005 school year. The district also expects to receive $4 million more than was originally projected for this next year from that same fund.

But the budget contained funding cuts, including: unpaid four-day furloughs for administrators; reductions in travel, meeting costs and mileage; a 10 percent reduction in custodial costs; a freeze on spending for materials and supplies; and the elimination of non-mandated bus routes and changes in other bus routes to make them more efficient.

Employees' salary increases weren't included in the budget, but Phillips said the district should put some money in reserve for those increases after negotiations later this year. She estimated salary increases could be 3 percent, while health care benefits might rise by 6 percent.

"The budget is not as grim as we originally anticipated," Phillips said. "But we need to pay attention to long-term stability for the district."

Several board members said they were happy about the new-found revenue from the state, but they also worried about the uncertainty of the Legislature's role in closing the budget gap.

"It makes me nervous, in fact it makes me incredibly nervous," said board member Bobbie Regan.

Phillips said she understood the concern.

"It's scary for us, too," Phillips said. "But given our history, what is scarier to us is to cut a large number of teachers and staff, only to have the Legislature meet in a special session and approve (the funding) and we have already made the cuts."