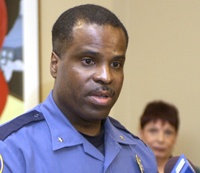 Portland Police Chief Derrick Foxworth has been accused by city officials of sexual misconduct against a female officer before he became chief. A nine-page legal notice released by the city alleges that Foxworth sent a series of graphic e-mails to Angela Oswalt.

Oswalt, 46, a longtime Police Bureau veteran, claims that she feared for her job unless she succumbed to Foxworth's advances.

"I regret I cannot go into detail or provide you with anything, as much as I would like to, regarding a brief personal relationship that took place five to six years ago," Foxworth said Wednesday afternoon. "I've been directed to forward all inquiries to Yvonne Deckard at the Bureau of Human Resources. In the meantime, I'm going to focus my energy on directing the bureau and on serving the citizens of Portland."

Foxworth had made no further comment on the matter as of press time.

"The city of Portland is investigating all allegations of misconduct made against Portland Police Chief Derrick Foxworth," Mayor Tom Potter said in a statement on his city Web page, www.portlandonline.com/mayor/.

"Because this is a personnel matter, city officials cannot discuss the investigation.

"But what I can say is this: While I share our community's desire to learn the results of this investigation as quickly as possible, my main concern is in ensuring that this process is both impartial and fair to everyone involved. I have absolute confidence in this process.

"I have asked Chief Foxworth to continue in his duties pending resolution of this matter."