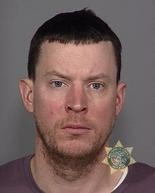 Daniel Lee Jones, of Portland, has been indicted and arrested for allegedly mailing a hangman's noose to the Lima, Ohio, chapter of the National Association for the Advancement of Colored People, the Justice Department announced Thursday.
At the time he mailed the noose for the purpose of threatening Jason Upthegrove, Jones, 32, was a regional director of a group that advocated white supremacist ideology, according to the indictment unsealed following Jones' arrest late Thursday in Portland. Prior to mailing the noose, Jones sent hate literature to residents of Lima regarding the shooting of an African American woman by an officer employed by the Lima Police Department. Meanwhile, Upthegrove was advocating at community assemblies and to the media for equal police services for African Americans and speaking out against the hate flyers.
The indictment alleges that Jones used the U.S. Postal Service to send a package that included the noose to Upthegrove's home for the purpose of intimidating him and interfering with his right to engage in public advocacy for equal police services for African Americans. The two-count federal indictment charges the defendant with interference with federally protected activities and mailing threatening communications. Upthegrove received the noose on Feb. 14, 2008.
"A noose is an unmistakable symbol of hatred and violence in our nation, conjuring up images of a despicable period in our history. Mailing a noose to an individual who advocates for racial equality sends a clear threat of violence," said Thomas E. Perez, Assistant Attorney General for the Civil Rights Division.
"In our country, the law must protect the rights of free speech and peaceful assembly. When anyone resorts to threats of violence to abridge those sacred rights, the Department of Justice will be there," said U.S. Attorney Steven M. Dettelbach for the Northern District of Ohio.
If found guilty of mailing a threatening communication, Jones faces a maximum punishment of five years in prison and a potential fine of up to $250,000. If found guilty of interfering with federally protected activities, he faces a maximum punishment of one year in prison and a fine of up to $100,000.
The case was investigated by Special Agent Brian Russ of the FBI, in conjunction with Assistant U.S. Attorney David Bauer for the Northern District of Ohio, and Special Legal Counsel Barry Kowalski and Trial Attorney Shan Patel from the Justice Department's Civil Rights Division.
The charges set forth in an indictment are merely accusations and the defendant is presumed innocent until proven guilty.