Diversity in Firefighting Has Improved, But There's a Long Way to Go

By Brian Stimson of The Skanner News
Published: 08 October 2009 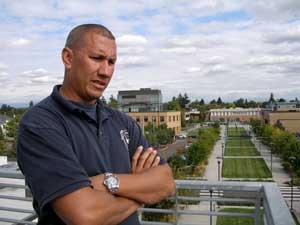 More than 15 years ago, the Portland Fire Bureau was locked into a conflict nearly identical to a July Supreme Court case involving New Haven, Conn. firefighters: Would it be acceptable to hire or promote minority firefighters from a separate testing list than their White colleagues?

At the time, Portland's Black Firefighters Association argued that testing requirements favored White candidates and that African Americans never had a chance to receive promotions or get hired in the first place. At issue was a ranked list of 200 candidates for 24 positions. The first Black person on the list was ranked 31. Then Chief Robert Wall decided to interview only the first 30 people for the 24 positions.
While diversity has increased since that time – in 1994, only 2 percent of the Fire Bureau were African Americans – change has been slow. Because of outreach and a pre-employment training program, the number of minority firefighters has increased by about 50 percent, but a Portland Community College firefighter instructor says the lack of minority students in his program could hurt diversity achievements within the city and the area.

PCC Firefighter Instructor Shawn Parrish says it can be frustrating having a training facility in the heart of the city. Standing at the top of the training tower on the west side of campus, he looks out on the full parking lot below him. Live fire drills aren't allowed, he says, so students take six field trips to practice putting out flames – a practice that has its ups and downs, according to fire instructors.
The primary goal of housing a firefighter training facility at the Cascade campus was to attract more minority students, but Parrish says the program hasn't lived up to this goal.
In the first class of the fall, he says he has one African American student. And it's not an aberration. Most of his classes don't have more than a handful of minority or women students.
Ed Lindsey, who heads the PCC firefighter training program, says the move to Cascade from Gresham several years ago has been a positive one. He says that the handful of African Americans, Hispanics and women in the classes each year – which he estimates at 10 percent combined – is more than the program ever attracted before the move. Could the college be making a more concerted effort to bring minorities into the program? Is this an attainable goal?

"Yes and yes," Lindsey told The Skanner.
With African and Native American blood flowing through his veins, Parrish says he would be the ideal candidate for drawing recruits into the program.
"It's people that I related to that got me involved (in civil service)," he says. "I can, under my own initiative, reach out to the community, but it's difficult without the support from the school. There's only so much time in a day."
And while PCC Cascade does outreach to minority communities in a variety of ways, both Parrish and Lindsey say the fire program isn't singled out. Not that Parrish thinks that job could be done by someone not in the program.
"I know what other minorities can relate to," he says. "You have to show them they can do it. Different cultures have to be involved in programs."

According to the Portland Fire Bureau, about 4 percent of the 628 employees are Black; 5 percent are Asian American; 3 percent are Native American; 5 percent are Hispanic; and 83 percent are White.
To say change has been slow in the overwhelmingly White firefighting business might be an understatement, but current Portland Fire Chief John Klum says it's been a big improvement.
"Up to 1993 our recruitment efforts were nothing," says Klum. "The problem we have to overcome is going to take a long time, because the fire service is unique. When we have people coming in the door at day one, they stay 25 to 30 years. So if you get a bulk of White males for the majority of your body and you're relying on your ability to recruit through attrition … if you look at through that perspective, we're moving in the right direction, it's just going to take another 15 years before you see the numbers reflect what you'd see in the private sector."
The Fire Bureau is on the verge of hiring about 150 firefighters in the spring. According to Terry Foster, recruiting officer, about 2,000 people will show up to their testing site at the Convention Center on Feb. 18. He expects a small majority of them to have no training or experience; the other half will have trained at programs like PCC or Chemeketa Community College in Salem. The bureau splits the number of trained and untrained recruits when hiring.
"Our recruiters main goal has been to recruit in those diverse populations," says Scott Fisher, division chief. "Hopefully when we hire 150 people in February, we'll see a true demographic from the city of Portland."
The paid training program for the bureau was started in the early '90s to ensure people from underserved populations had a better chance of being hired. Klum says its working, but too few minorities show up at testing events.

Bill Kendrix, a retired former member of the Portland Black Firefighters Association, says another difficult aspect for minority recruitment was the test and interview process.
"The interview part is important," he told The Skanner News. "Just getting past one phase is what they focus on, but they don't take the opportunity to sell themselves on the interview."
Kendrix used to coach African American fire fighters on how best to take tests and perform interviews.
This year, the bureau is looking to craft a test training program with the city's human resources department. If the program gets off the ground, it could help solve some of the longstanding issues Kendrix says have kept minorities from being hired and from being promoted. In his opinion, a lot of what keeps Blacks out of the fire fighting business is cultural differences.
"Supervisors didn't always grade Black firemen how they should have been graded," he said. "It's important to have people in that position from diverse backgrounds."
In the five years since Kendrix retired – when he was the only Black lieutenant -- diversity in the upper ranks of the bureau has gotten better.
"It's higher than the general percentage (of the bureau)," Fisher said.

Kal Robertson, director of the Emergency Services Program at PCC, acknowledges the need for better minority recruitment. She said she is planning on personally doing community outreach for the fire program. As an African American female, she hopes to instill some of the same lead-by-example inspiration that Parrish thinks will propel more minorities into firefighting.
Former partnerships with the Portland Fire Bureau and Portland Public Schools helped to get the word out about programs. Parrish says the ability for the school to give students school-credit internships with wildland fire fighting agencies, as well as other types of internships, would go a long way to make the program more appealing to youth.

Robertson said she is looking into creating the wildland internship. PCC is also offering for the first time a class titled "Multicultural Diversity Strategies for Fire Services."
With any hope, that and a lot more will make the Portland Fire Bureau, and the 30-odd fire protection agencies in the immediate area, reflect the communities they are trained to protect.