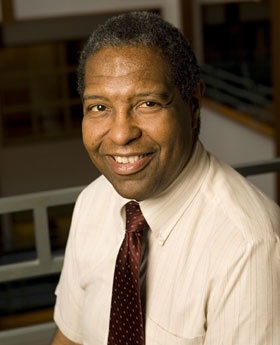 Duke University Economist William "Sandy" Darity will address the recession, the widening of the racial wealth gap and intergenerational poverty in the African-American community during a live webcast this Friday.

The discussion will be webcast from the university's publicly available Ustream channel from noon to 2 p.m. on Oct. 2. Viewers can submit questions in advance or during the session by email to live@duke.edu, on the Duke University Live Ustream page on Facebook or via Twitter with the tag #dukelive. An archive video will be available on the website after the webcast of the live discussion.
Darity is a professor of public policy, African and African-American studies and economics. His research focuses on inequality by race, class and ethnicity, stratification economics, the education achievement gap, skin shade and employment and reparations among other topics. Most recently, he has studied how recessions disproportionately affect Blacks and Latinos and refutes the idea of a "post-racial America" with the election of a Black president.
"Since the election of Barack Obama, a growing belief has emerged that race is no longer a defining feature of one's life chances. But the extraordinary overlap between wealth and race puts a lie to the notion that America is now in a post-racial era," Darity wrote in a Sept. 2009 article in the American Prospect. He thinks the current recession will likely worsen the wealth gap, what he calls "the most acute indicator of racial inequality."