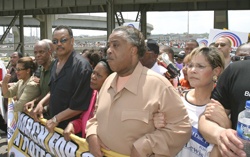 The Rev. Al Sharpton, center foreground, and the Rev. Jesse Jackson Sr., to Sharpton's right, in sunglasses, lead an April 1 march in New Orleans in favor of full voting rights for people displaced by Hurricane Katrina.

The system of mail-in voting set up for the April 22 election for mayor and other positions in the city will make it difficult for voters living elsewhere to cast a ballot, Jackson and other activists said. Black people, who made up 70 percent of New Orleans before Katrina hit, form a large majority of those still displaced.

The city election could have a broad effect nationwide, Sharpton said: "What happens in New Orleans will affect voting rights all over the United States."

Jackson and other activists are demanding satellite polling places for displaced voters in cities outside New Orleans, and even outside Louisiana. Fewer than half of the city's 460,000 residents have returned since the Aug. 29 storm flooded the city.

Activists also urged the release of updated lists of displaced voter addresses, a request the Federal Emergency Management Agency has denied, saying it would breach privacy.

About 2,000 people attended the rally and march, police said.

The rally was held at the convention center, site of some of the most vivid scenes of desperation out of Hurricane Katrina. It included state and federal lawmakers and comedian Bill Cosby, who urged residents to rebuild without the murders and drug dealing that plagued New Orleans before the storm.

"It's painful, but we can't heal ourselves unless we cleanse the wounds," Cosby said.

After the rally, protesters marched across a Mississippi River bridge where residents trying to leave the city after Katrina were turned back.

Emelia Mays, 52,, from suburban Avondale, said she marched with her family to support those unable to return.

"I am home, and I can vote," said Mays, who remembers being forced to the back of a New Orleans bus with her mother as a child. "For those that can't, I have to stand up."

In an interview after the march, Jackson said mail-in ballots will be vulnerable because of delay-plagued postal deliveries in the city.

He also said it was unfair to eligible voters and candidates that the names and addresses of displaced residents have not been disclosed: "The running don't know who is eligible, and the eligible don't know who's running."