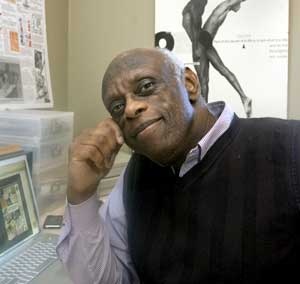 Rupert Kinnard is an unsung hero of Portland's artistic community.
A former nationally-renowned cartoonist with his characters Diva and the Brown Bomber, he is fondly remembered as one of the country's few creators of syndicated Black comic-book characters – a distinction made even more pointed by the fact that he is an icon in the gay community.
Now Kinnard's career in graphic design is headed for another innovation: an electronic memoir that includes art, personal stories, and memorabilia that can be published in a book or even on the Internet with videos and music.
He calls it the Life Capsule Project, and he hopes it will catch on with anyone interested in setting down their own life story.
"When I think in terms of trying to encourage people to do this type of thing with the technology

that's available, I think of parents – if they're able to put together a life capsule I think that's a great gift for their kids," he says. "I think of grandparents being able to do it on some level.
"So I'm presenting my life capsule the way I prefer to do it, but I think it would be real interesting for other people to explore the different formats to do the same thing."
Born and raised in Chicago, Kinnard got his start in newspaper at the Chicago Sun-Times in the early 1970s, where his first cartoon was published.
He went back to school to earn a degree in graphic design, where he learned how to lay out publications and posters, and eventually moved to the West Coast, where he worked both as an award-winning newspaper designer – including at The Skanner News — and a self-employed cartoonist drawing topical panels about the day's political issues with his characters Diva and the Brown Bomber.

Kinnard's life took another sharp turn in 1996, when a car accident in Mississippi left him paralyzed from the waist down and confined to a wheelchair.
Together with his companion of many years, Scott Stapley, Kinnard returned to his vintage home in Portland's Lloyd District and built a new life as the proprietor of a guest house – but his gifts in graphic design still prompt him to create artwork, tell his own story of transformation, and encourage others to do the same.
"On the occasion of the Brown Bomber's 30th anniversary I had a big party – it was a 10, 20, 30 party," Kinnard said. "It was 10 years since being in the wheelchair, 20 years since living in Portland, and 30 years of the Brown Bomber."
To celebrate on a more personal level, Kinnard created a giant timeline of his life that he had printed onto a five-foot posterboard for the party. The timeline, and his friends' reaction to it, were the genesis for the Life Capsule Project.
"Years ago I became really enamored of quite a number of cartoonists creating graphic novels," he says. "There is also an upsurge of people doing graphic memoirs, where they tell their life story in terms of comics — I really wanted to do something like that but I just never could get up the energy to do it."
Kinnard was so energized with his timeline that he shared it others to get them excited about doing timelines of their lives.
"Especially with the digital age, you could scan photos and you could bring all of these elements together, into a visual document," he says. "It was really nice to get a sense of what happened when I graduated from high school, and went to college, and the music and the movies that were popular – it was just a really fun project."
The Life Capsule Project, as computer-based rather than paste and paper, has the potential to evolve into an electronic book, with even more kinds of electronic components such as sound and video.
"It's been really, really thrilling, almost as though I've been part of creating something that's very new," Kinnard says. "I'm bringing together scrap book, photo album, timeline, oral history, graphic novel.
"More than anything I really want to encourage people to look at the scope of their life in a certain way," he says. "I think in terms of the project that I'm working on as a gift to my mom, because I'm my mom's only son, and I'd like to encapsulate my life in a certain way and present it to her – all this information that she's going to look through it and say, I had no idea, you didn't tell me that."
Kinnard is currently working to get his Life Capsule published as a book, as well as an online resource. He's also brainstorming the content for seminars to teach others how to create electronic documents of their lives and "really just try to bring out the creativity in people."