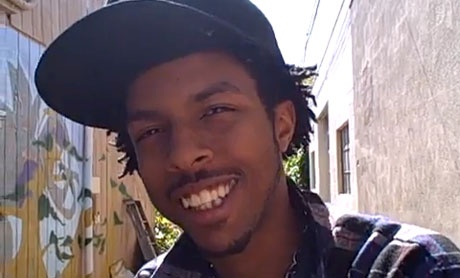 As the old saying goes, one man's trash is another man's treasure. Or in this case, one man's art is another man's criminal act worthy of jail time.
That's precisely the kind of perception DeAngelo Raines is trying to fight. An artist, musician, father and husband, Raines is passionate about graffiti art. For the last six months, Raines has been working with the University Park Community Center to establish a class centered around graffiti-style art for young people. It is scheduled to begin on Oct. 2.
But before getting into the logistics of the class, a definition is in order.
Graffiti refers to a wide variety of artwork, stylings, scribblings and other forms of expression, often painted in publicly viewed urban areas. It ranges from the complex, colorful typography-style pieces to cartoon-like characters to simple and quick tags that bear little resemblance to their time and paint-consuming cousins.
Although graffiti is as old as when humans lived in caves, the modern graffiti styles can generally be traced back to East Coast urban culture of the 1960s. By the late '70s, most East Coast cities, New York especially, were covered in colorful designs.
With his class, Raines wants to provide a low-cost, safe venue for students ages 12 to 18 to hone their skills as artists. To Raines, graffiti is more than putting up tags, it can be an avenue into the graphic design and fine art establishment, he says. It can be a way to make a living.
With his class, Raines plans on bringing in artists to teach different techniques – from spray paint, brush and rolls to fill-ins and outlines. He will teach students the techniques of mural making and how to organize events to showcase their work. But he wants his students to know graffiti style art is more than paint – it's a way to tell a story.
Art instructor Karen Karlsson says when budding artists interested in graffiti learn classical techniques, it expands how they think about the art form. She teaches a graffiti style fine art class at Portland Community College and says her students begin at square one – the basics of drawing, lighting, perspective, design and color.
"They become more relaxed because they know it's legal," she says. "It's a very accepted and much-loved art form."
She says her class is instructed to know their audience. A recent class assignment focused on the 2007 Virginia Tech shooting massacre. The students were given biographies of the victims and told to create their own vision.
"When they start working on a graffiti piece, I don't interfere," she said. "They never ask questions when working on graffiti … it's stream of consciousness."
The display is currently at the Mt. Scott Community Center on Southeast Division Street and 82nd Avenue. This year, Raines will be taking over Karlsson's PCC graffiti class. Karlsson says it is one of the only graffiti-style art classes being taught around the nation.

The Legal Quandary
Graffiti style art is now enmeshed in popular culture, says Raines, and for many people of his generation, its hard to remember a time before "wild style" even existed – the abstract style of lettering that transformed the art. Now, people like Raines and Karlsson are attempting to show artists how to hone their skills and produce legal work for the city to see.
But graffiti art can a legal and moral balancing act. Its beginnings, and some of the most visible examples of it, are considered illegal acts by authorities. If a "mark" is made on a public or private structure – without the permission of the owner – it is considered a crime which results in arrest, according to Portland city ordinance.
"The issue isn't so much about graffiti art," says Travis Richardson, program director at University Park Community Center. "We're really trying to focus on giving kids an opportunity and tangible outlet in presenting art in a legal way."
Karlsson says she has similar feelings about graffiti style art.
"I very much want them to create the kind of art they love," she said. "I'm not concerned about finding walls for them to paint. I want them to come into my indoor studio and create anything in a graffiti style."
Raines says he would even like to bring in speakers – perhaps those caught by police in the act of graffiti vandalism – to speak about the price of making outlaw graffiti. He intends to involve business people negatively affected by graffiti to speak to his students and wants them to think twice before bombing the city with paint. But many of the people he has met that target public and private surfaces are simply bored, or angry, without artistic motivations.
"They just have a can of spray paint and they're pissed," he said.
Much of the more artistic pieces of graffiti can be found – with exceptions of course – on the walls of abandoned buildings around town. A popular spot for artists was recently lost to development. The derelict McCormick and Baxter industrial site next to the University of Portland on the Willamette River bank long served as a place for artists to paint with little fear of harming property owners or getting the attention of authorities. The site was informally known as "pirate town" and is slated for University of Portland expansion. You can view many of the works that graced the walls of that outlaw art gallery at www.flickr.com/groups/portland-graffiti/ .
Although legal outdoor venues can be hard to find, Raines says they do become available with the help of a graffiti-friendly property owner. Maquette, of Six Days art coop on Alberta Street, authorized a crew of artists from http://www.royalfits.com/  to put a piece of art on her building. The crew is combining lettering with street art. View a video of Raines explaining how a tag is constructed on our youtube channel at www.youtube.com/theskannernews .
If you're interested in the class, contact the University Park Community Center at 503-823-3631. Visit Raines' blog at http://www.artnotcrime.blogspot.com/ . On the post, you can see graffiti-style art from around the world.
"It's a reflection of what society is doing and appreciating," Karlsson said.