By Monica Foster of The Skanner News and Wire Reports
Published: 16 September 2009 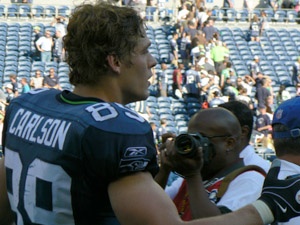 In the Seahawks season-opener, Seattle beat the St. Louis Rams on a sunny Sunday afternoon at Qwest Field in front of 67,610 screaming fans. Under the leadership of new head coach Jim Mora, the Seahawks did an NFL rarity, shutting out the Rams 28-0.
"It was a good game to learn from," coach Mora said. "I think if you're going to be a good football team in this league then you have to know how to handle adversity, if you can do it and get win, I feel positive about that."
"We turned the ball over three times in the first half so the fact that we were able to show some character and maturity… we obviously had a sloppy start offensively but we kept pounding the ball and made some plays."
The Seahawks appear to be headed in the right direction after coming off a perfect 4-0 pre-season, for the first time in Seahawks history.
Quarterback Matt Hasselbeck, who had two interceptions in his first three throws, regrouped and ended up throwing two touchdown passes in the second half to tight end John Carlson, finishing the game 25 of 36 for 279 yards, his most for a season-opener. Carlson scored two touchdowns; one on a 1-yard pass from Hasselbeck in the second quarter and the other 33-yard run putting Seattle up 21-0 in the third quarter.
"This is what we talked about on our first day way back," Hasselbeck said after the game. "It was just a great start for us."
In the final minute of the first half, Olindo Mare's 49-yard field goal was blocked and Rams 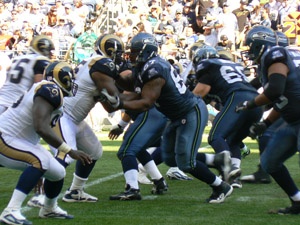 cornerback Quincy Butler scooped up the ball and ran it back 49-yards for an apparent touchdown. As the Rams were about to snap the ball, play was stopped as the booth officials called for a review on the play, which was later reversed when the officials noticed the Rams had 12 men on the field. Three plays later, the Seahawks scored in the second quarter with a 12-yard touchdown by wide receiver Nate Burleson with Seattle leading at the half 14-0. Running back Julius Jones busted up the middle on a 62-yard run in the third quarter and finished with 117 yards on 19 carries.
Seahawks linebacker Leroy Hill left the game with a groin injury and will be out 2-3 weeks and special teams player Will Herring will start while Hill recovers.
The Seahawks travel to San Francisco to take on the 49ers (1-0) this Sunday afternoon.

SEATTLE (AP) -The Seattle Seahawks lost two of their three starting linebackers Sunday when outside linebacker Leroy Hill and middle linebacker Lofa Tatupu left the game against St. Louis, though coach Jim Mora thinks the injuries are minor.
Hill, out with a groin injury, spent Seattle's third defensive series of the first quarter on a training table getting his left leg checked by doctors. He did not return.
Will Herring, usually a special teamer, replaced him.
Tatupu left in the third quarter with a hamstring injury, after Seattle had built a 21-0 lead. Tatupu also did not return, though the defensive captain spent a few minutes riding a stationary bike behind the Seattle bench.
Mora left no reason to think either won't play next week at San Francisco.
"We were playing it safe at that point, especially with Lofa," Mora said of keeping Hill and Tatupu out with the big lead.
Tatupu was replaced by David Hawthorne, who then nailed Rams quarterback Marc Bulger with a hit under the chin on a scramble. Bulger got up and shoved Hawthorne in the face mask, part of a chippy day between division rivals.
Seattle signed Hill to a six-year contract worth a guaranteed $15.5 million in the spring. The deal could be worth $38 million. He stayed away from non-mandatory minicamps to protest the Seahawks placing the franchise tag on him and depriving him of free agency. He is expected back on the field Nov. 1.