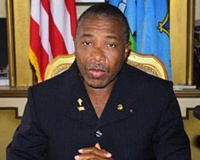 ABUJA, Nigeria—Former Liberian President Charles Taylor, who vanished in Nigeria after authoritie reluctantly agreed to transfer him to a war crimes tribunal, was arrested trying to cross the border into Cameroon, Nigerian police said Wednesday.

Taylor was captured Tuesday night by security forces in the far northeastern border town of Gamboru, in Borno State, nearly 600 miles from the villa in southern Calabar from which he reportedlydisappeared Monday night, Information Minister Frank Nweke said in a statement.

President Olusegun Obasanjo, on a visit to the United States, ordered Taylor's "immediate repatriation" to Liberia, the statement said.

Taylor disappeared just days after Nigeria, which had granted him asylum under a 2003 agreement that helped end Liberia's 14-year civil war, bowed to pressure to surrender Taylor to face justice.

The admission that Taylor had slipped away came an hour before Obasanjo left Nigeria on a presidential jet headed for Washington, where he was scheduled to meet with President George W. Bush on Wednesday. The White house had suggested the meeting might be canceled if Nigeria's leader didn't have some answers for Bush about Taylor's disappearance.

Nigeria had announced it would hand Taylor over to a U.N.-backed tribunal to be tried for alleged war crimes related to Sierra Leone's 1991 to 2001 civil war, but the government made no moves to arrest him before he disappeared.

Taylor, a one-time warlord and rebel leader, is charged with backing Sierra Leone rebels, including child fighters, who terrorized victims by chopping off body parts. He would be the first African leader to face trial for crimes against humanity.
While the Sierra Leone tribunal's charges refer only to the war there, Taylor also has been accused of starting civil war in Liberia and of harboring al-Qaida suicide bombers who attacked the U.S. embassies in Kenya and Tanzania in 1998, killing more than 200 people.

On Wednesday, neither the Liberian government nor officials of the 15,000-troop U.N. peacekeeping force would comment on Taylor's arrest. But six white armored personnel carriers were seen driving toward the international airport outside the capital, Monrovia, apparently to stand by should Nigeria immediately fly Taylor there.

The U.N. Security Council had expressed surprise and concern at Taylor's disappearance and Secretary-General Kofi Annan had said he planned to talk to the Nigerian authorities about it. He urged all countries to refuse to give Taylor refuge.
The U.N. tribunal's prosecutor, Desmond de Silva, warned that Taylor was "a threat to the peace and security of West Africa."

Many of Taylor's loyalist soldiers are believed to be roaming freely in Liberia, Sierra Leone and civil-war divided Ivory Coast, from where Taylor launched his rebel incursion into Liberia on Dec. 24, 1989.