By Brian Stimson of The Skanner News
Published: 10 September 2009 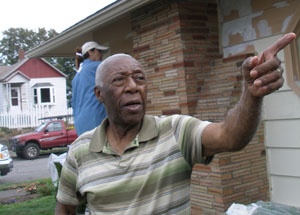 In 1952, Howard Minor and his family were among the first Black families to live north of Dekum Street.
But it wasn't easy. Minor had to find a lender and a seller willing to violate the era's racist redline rules. He moved in to a nice mid-century ranch-style home on Northeast Holland Street.
Nearly 60 years later, Minor -- now in his mid-'80s and unable to perform as much home maintenance as he once did – has help from volunteers from Health Net of Oregon.
"Over the years, we've been concerned about keeping our family in this house," Shirley Minor, Howard's daughter, said. The price of even modest repairs begins to add up to an unaffordable amount, she said.
Taking a break from the office, President Chris Ellertson says having his employees come and do some manual labor is helpful for everybody. Once a year, Health Net of Oregon – a national health insurance company – helps fix up the home of an elderly person who is unable to do so themselves. This year, the company teamed up with Rebuilding Together to help with the work. He says the work helps bond people together while helping out a homeowner.
Bill Dwyer, a Health Net business analyst volunteering as the project manager, says his team of office workers scraped and painted the outside of Minor's home, replaced gutters, fixed the garage door, hacked out tree stumps, installed a new ground retaining wall and tore out 1960s-era yellow carpeting to reveal quality hardwood floors.
"It's the right time for any of us to reconnect with our community to support one another," Ellertson said.
The Minors now have a house better able to withstand the storms of tomorrow. After all, Minor says he's already outlasted vandals, thieves, and several recessions.