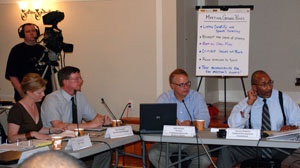 Stung by the long history of criticism on its inner-city development projects, the Portland Development Commission is rolling out an unprecedented public access and feedback system in the run-up to its newest North and Northeast Urban Renewal Area development planning.
As the citizen advisory committee for the project convenes through next year at the Billy Webb Elks Lodge, PDC staff says local residents will be permitted to speak at every meeting, all the meetings will be televised, every public comment will be noted and followed up on, and the process itself will be exhaustively documented on its own Facebook page as well as live-blogged on Twitter.
"We're taking a look at both those urban renewal areas and saying what do we need to do, are we going in the right direction, do we have the resources we need, is this what we want," said Joleen Jensen-Classen, the public participation coordinator.
"And during the first meeting, the public during the comment testimony section gave us a great deal of information, so what we have done with all that is we've captured it all and it's all been put into a log — so they're not just asking questions and making comments and it goes into the ether," she said. "We're tracking it, and we're going to respond to it, and those kinds of things are what are going to determine the direction of these two urban renewal areas for the future." 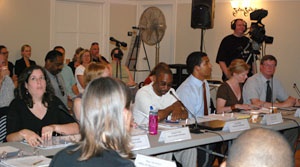 The 19-member citizen's advisory committee includes businessman Roy Jay, Northwest Association of Minority Contractors President James Faison, PCC Cascade President Algie C. Gatewood, Alberta Street visionary Roslyn Hill, and business experts Sheila Holden and Joice Taylor.
Faison says this may be the rare opportunity for longtime local residents to actually benefit from a massive redevelopment program.
"I think it's going to be good because the people that are making up this committee are people that are a little bit out of the norm," Faison said. "I mean they're the people that are the contractors, neighborhood associations, it's made up really of a good mixture of people to voice their concerns and then I think those concerns came out kind of even in the first meeting."
Monthly planning and public comment meetings started last week for the North/Northeast Economic Initiative, which includes development projects along the Interstate Corridor and Oregon Convention Center Urban Renewal Areas.
The area is sensitive because PDC statistics show that despite years of gentrification, these two URAs are still home to the biggest population of African American households in the city.
Faison said concerns over redevelopment's potential to escalate displacement of families and businesses were at the top of the agenda at the citizen advisory committee's first meeting, held Aug. 12 at the Billy Webb Elks Club.
"They brought up some concerns about the Northeast area and the people that are residents in the Northeast area that are being displaced; the money that's coming into the Northeast area and the people not getting the work; the people coming in from the outside the Portland area — and just concerns about how will that be arranged moving forward," he said.
Still he's encouraged by the potential of public participation in influencing the development projects.
"I think every voice needs to be heard, every voice means something," he said. "For everyone that can come to these meetings and be sitting in these meetings — it's actually the people that are born and raised in these neighborhoods if they're still around."
It takes about 10 minutes for Jensen-Classen to list all the ways to follow the development plans and give feedback.
"At every committee meeting there's comment cards that if people don't want to raise their hands they can write a question down and we'll take care of it that way," she said. "They can email, they can go to Facebook or the webpage and enter comments there, we're tweeting at every meeting so people can follow us on Twitter, and they can send tweets back."
The meetings are all being live cast as well as taped by Portland Community Media, and they will be broadcast and rebroadcast on Channel 30, and a 10-minute video summary will be posted on Youtube.
Find out more on the web at www.pdc.us