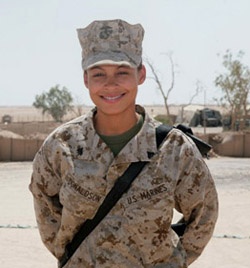 Marine Corporal Antoinette L. Donaldson of Seattle spoke with The Skanner last week direct from her post in Iraq via satellite telephone, describing her work and how she misses her family back home.
When she gets home she says she may make a career out of the Marines, but she's also thinking about going to the University of Washington to be a schoolteacher. Although she works in an administrative capacity helping her fellow soldiers troubleshoot their paperwork, earlier in her tour she spent time patrolling with the infantry – in weather as hot as 112 degrees.

Corporal Donaldson says she's grown more appreciative of her family and the freedoms Americans enjoy in our home country. Her family resides in Seattle, including her mom, Sheila Blackwell; sister Amber Donaldsen; sisters Celeste and Christen Blackwell, brother Jonathan Blackwell, and her husband Devon Taylor. "I miss them a million times a day and they're always on my mind," she told The Skanner News.

As of Aug. 1, members of the military who served on active duty after Sept. 10, 2001 will be eligible for the biggest government education spending supplement since the Montgomery GI Bill after World War II.
The Post-9/11 GI Bill will allow members of the military who served more than 90 days active duty after the fall of the twin towers to go to an institute of higher education on the government's tab – estimated to be $78 billion over the next 10 years. Service members will be able to attend 4 years of an instate, accredited institution, with housing and books stipend included. The legislation was penned by Democratic Sen. Jim Webb of Virginia.
Military members can even transfer the benefits to a spouse or children if they agree to serve an additional four years.
After the bill was signed, President Obama extended thanks to lawmakers and saluted the men and women who made sacrifices for their country. He used the opportunity to take jabs at wartime profiteers.
"We have lived through an age when many people and institutions have acted irresponsibly -- when service often took a backseat to short-term profits; when hard choices were put aside for somebody else, for some other time. It's a time when easy distractions became the norm, and the trivial has been taken too seriously," Obama said at a George Mason University ceremony. "While so many were reaching out for a quick buck, they were heading out on patrol."
The bill is not retroactive – service members will only be able to take advantage of the benefits after Aug. 1. Any college or job training expenses incurred in the past are not eligible for compensation.

The original GI Bill, signed in 1944 by President Franklin D. Roosevelt, is widely credited as having created the largest middle class economic boom in history, with nearly half of the 16 million World War II veterans taking advantage of the benefits. This new GI Bill will likely not have the same effect as the original – not nearly as many men and women have served in the military when compared to the massive force deployed to fight the Axis forces. There are currently about 1,445,000 active duty personnel, not including those who have been on active duty in the past 8 years.
Veterans Affairs Secretary estimates that 250,000 will attend colleges and universities by 2011.
Private schools who enter into agreements with the Veterans Administration will also be able to provide scholarships with a 50 percent match from the government, allowing veteran students a wider range of choices than just state schools. A moving allowance of $500 is also included in the bill.
For more information please visit www.gibill.va.gov.