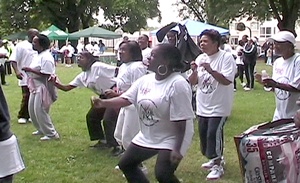 About 600 people of all ages rocked to the beat of dance music in Dawson Park on Saturday, Aug. 15, at the early hour of 8 a.m. The crowd turned out to take part in Portland's 7th Annual Wellness Within Reach Health Walk organized by the African American Health Coalition.
The walk is a fundraiser for the groundbreaking program, which offers health information, nutrition advice, free exercise classes, health screenings and support, all aimed at improving the fitness and health of African Americans in Portland.
"We need to take responsibility for our own health," said Lolenzo Poe, who was named the grand marshal for the event. "Wherever you go and whomever you talk to, you need to tell them to support the African American Health Coalition."
The walk included a 1.5-mile loop and a longer 5K course. Volunteers along the route encouraged walkers and handed out water.
Just as in other parts of the country, African Americans are struggling with health disparities that result in increased rates of illnesses such as childhood asthma, diabetes, heart disease and higher mortality rates from diseases such as cancer. Health experts say these disparities are connected to lack of health insurance and access to preventive care as well as to life stresses, such as poverty and poor nutrition.
The message from the health coalition, however, is that by eating well and exercising regularly, African Americans can become healthier, fitter and less vulnerable to disease. The coalition offers classes such as water aerobics and strength training, and help in cooking balanced, healthy and delicious food.
Corliss McKeever, executive director of the coalition, said she was pleased that so many people had turned out for the walk. "That tells us that what we do is highly valued and needed by this community."
McKeever doesn't yet know how much was raised to benefit the coalition. That figure will be announced once the accounting for the event is complete.