Half Million March for Immigration 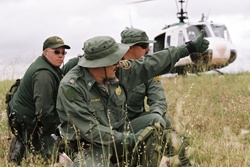 U.S. Border Patrol agents in action along the U.S.-Mexico border in Arizona.

LOS ANGELES—More than half a million immigration advocates marched though downtown Los Angeles Saturday in one of the largest demonstrations for any cause in recent U.S. history.

The march — duplicated in communities across the country — was one act in a national drama centering on the issue of illegal immigration that has unfolded over the past week.

The number of protestors demanding that federal lawmakers abandon attempts to make illegal immigration a felony and to build more walls along the border surprised police, who estimated the crowd size using aerial photographs and other techniques, police Cmdr. Louis Gray Jr. said.

The U.S. House of Representatives has passed legislation that would make it a felony to be in the U.S. illegally, impose new penalties on employers who hire illegal immigrants, require churches to check the legal status of people they help, and erect fences along one-third of the U.S.-Mexican border.

However, the Senate Judiciary Committee on Tuesday rejected the harsher House bill and sent to the Senate floor a bill that lays out a path to citizenship for illegal immigrants, provided they take certain actions.

"It's a big day for us. We may not have a lot of big days, but this is a big day," Frank Sharry, executive director of the National Immigration Forum, a pro-immigrant group, said after the committee approved a package of immigration and border security measures.

In general, the Judiciary Committee's bill is designed to strengthen enforcement of U.S. borders, regulate the flow into the country of guest workers and determine the legal future of the estimated 12 million immigrants living in the United States illegally.

The bill would double the Border Patrol and authorize a "virtual wall" of unmanned vehicles, cameras and sensors to monitor the U.S.-Mexico border. It also would allow more visas for nurses and agriculture workers and shelter humanitarian organizations from prosecution if they provide non-emergency assistance to illegal residents.

The most contentious provision would permit illegal aliens currently in the country to apply for citizenship without first having to return home, a process that would take at least six years. They would have to pay a fine, learn English, study American civics, demonstrate they had paid their taxes and take their place behind other applicants for citizenship, according to aides to Sen. Ted Kennedy, D-Mass., who was instrumental in drafting the legislation.

The Judiciary Committee also approved a five-year plan to provide visas for about 1.5 million agriculture workers and allow them to eventually seek legal residency.

President George W. Bush on Saturday called for legislation that does not force America to choose between being a welcoming society and a lawful one.

"America is a nation of immigrants, and we're also a nation of laws," Bush said in his weekly radio address, discussing an issue that had driven a wedge into his own party.

Bush sides with business leaders who want to let some of the estimated 12 million undocumented immigrants stay in the country and work for a set period of time.

Any bill produced by the Senate would have to be reconciled with the House measure. Despite Bush's support for letting illegal immigrants with jobs avoid deportation, many Republicans vow to prevent what they say amounts to amnesty from becoming law.

"I will oppose amnesty at all stages," said Sen. John Cornyn, R-Texas, who was on the losing side of Monday's 12-6 vote by the Judiciary Committee. He said Congress "made a mistake in 1986" by granting amnesty to 3 million illegal immigrants "and now we have 12 million."

The bill's next step is the full Senate, where Majority Leader Bill Frist, R-Tenn., is negotiating with other senators on how to handle the committee's bill and his own proposal, which focuses more on punishing employers who hire undocumented workers.

"The situation along our Southern borders now ranks as a national security challenge, second only to the war on terror," Frist said Monday. "Every day thousands of people violate our frontiers."

But many protesters rejected the national security claim, noting that the legislation would hurt Hispanics the most.
"When did you ever see a Mexican blow up the World Trade Center? Who do you think built the World Trade Center?" asked David Gonzalez, 22, who marched in Los Angeles with a sign that read, "I'm in my homeland.' "

Frist said the Senate will begin a debate on immigration later this week with the aim of passing a bill by April 7.
Recent polls show that about six in 10 Americans oppose letting illegal immigrants remain in the country and apply for citizenship and three of every four don't believe the government is doing enough to stem the continuing tide of new arrivals.

"For years, the government has turned a blind eye to illegal aliens who break into this country," said Rep. Tom Tancredo, R-Colo. Tancredo helped lead the fight for a bill the House passed in December that would define illegal immigrants as felons, build fences across a third of the U.S-Mexican border and enlist local police and the military to help patrol it.

On Saturday, the Los Angeles protests were echoed in cities across the country. In Denver, more than 50,000 people protested downtown Saturday, according to police who had expected only a few thousand. Phoenix was similarly surprised Friday when an estimated 20,000 people gathered for one of the biggest demonstrations in city history.