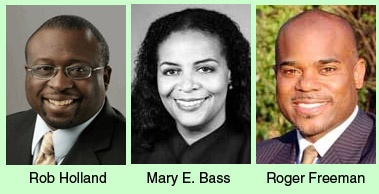 Three African American candidates in King County will likely advance to the November elections, pending official certification expected in about two weeks.
Port of Seattle Commissioner candidate Rob Holland, City of Federal Way Commissioner hopeful Roger Freeman, and Seattle School Board incumbent Mary E. Bass have all emerged as contenders for the Nov. 3 elections.
For City of Kent Council Position No. 6, Barbara Phillips turned in a respectable 24.22 percent but still fell in third behind Elizabeth Albertson, 43.04 percent, and Geoff Koepp, 32.42 percent.
The Mayor of Seattle race found James Donaldson in fourth with 9.23 percent, behind Mike McGinn, 28.58 percent, Joe Mallahan, 25.77 percent, and Greg Nickels, 25.06 percent.
Results have been posted online for more than 181,000 mail-in ballots, while elections officials say they're beginning to count votes from the county's three accessible voting centers.
The election's total turnout will be tallied by the end of this week, and officials say they expect it to be around 33 percent.
Meanwhile, the ballot count will continue for the next several weeks, with the expected election certification on Sept. 2. Daily count results will be posted to the county's website every day at 4:30 p.m. until then.
"While the election is still underway with much work yet to be done, it's been a very successful operation from our perspective," said King County Elections Director Sherrill Huff, in a statement. "We're very pleased with the number of ballots we've been able to process with our new equipment resulting in a larger number to report on election night."
The ongoing ballot count may matter in the race for Mayor of Seattle, where the point spread for the second slot – pitting incumbent Nickels and upstart Mallahan -- is less than one.
Bobby Forch, who finished out of the running for Seattle City Council Position No. 8, said last week that electing more people of color is crucial for better governance.
"I think one of the things, when you're talking about a council, it's nine people, and although I don't believe there's a special seat held for any ethnic group, I do believe that diversity on the council is a good thing -- for the city and for us," he said.
"Of course there are specific issues, that speak to specific communities and it's good to have that diversity of voice and insight I think for the broader view and help in shaping real equitable policies for the city as a whole."

RETURNS -- BY THE NUMBERS