On the outside, it looks like an ordinary 40-foot TriMet bus, but under its engine panels is a one-of-a-kind cooling system that makes it unique in the transit industry. 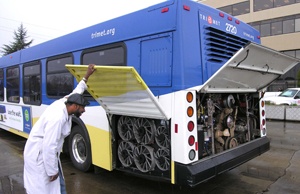 "TriMet is the first in the nation to combine cutting edge technologies from the racetrack and military field in a bus that should get better fuel economy and require reduced maintenance," said Fred Hansen, TriMet's general manager.

For the next eight months, the bus is testing military components and NASCAR racecar cooling technology to potentially boost fuel economy by 5 to 7 percent and lower maintenance costs. Switching the engine and transmission cooling systems over to electric motors should produce the efficiency gains.


Pictured:TriMet Maintenance Trainer Mark Tellis inspects the six electric fans retrofitted to a test bus. By running electrical fans instead of a standard fan that runs on belts and hydraulics, TriMet hopes to see a 5 percent to 7 percent increase in fuel economy during testing over the next eight months.


Traditionally, bus-cooling systems work off hydraulic and coolant pumps powered directly by the diesel engine. The original equipment cooling system draws up to 50 horsepower off the engine, draining power and fuel efficiency.|

The conversion meant more electricity was needed to power these new components, so a high-tech alternator was added. Originally developed for military applications, the alternator was made available through funding from the U.S. Army Tank-automotiveand Armaments Command. One of the agency's goals is to reduce costs by commercializing technology that has both military and commercial uses.

TriMet will test and evaluate the bus's performance through this fall. About 40,000 miles will be put on the test bus during the evaluation period. A market exists for retrofitting buses and other commercial vehicles with equipment that increases fuel economy. For such conversions to be attractive to transit agencies, however, the costs need to be recaptured through greater efficiencies within two to three years.