The End of Rae Lewis-Thornton's 'Secret' 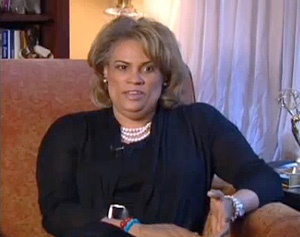 CHICAGO (NNPA) – Essence magazine Editor-in-Chief Susan Taylor heard Rae-Lewis Thornton speak and immediately decided that her story needed to be shared with her magazine's readers.  The December 1994 cover of Essence uncustomarily carried only one story, "Facing AIDS: I'm young, I'm educated, I'm drug-free, and I'm dying of AIDS" by Rae Lewis-Thornton.
The secret that she had shared only with the closest of close friends would now be openly discussed in beauty shops, at social gatherings and around company water fountains. Because everyone else would be reading about the most intimate details of her life, Lewis-Thornton decided she needed to have a long overdue conversation with Georgia Lewis, the woman she called mama.
Lewis-Thornton's biological mother was White, her father was Black and both were heroin addicts living in Buffalo, N.Y. Her paternal grandfather, Alfred Lewis, Sr., brought Rae into his household when she was a toddler. By then, he was 55 years old and his third wife, Georgia, was 34.
But Rae's doting grandfather died of a stroke when she was 6 and Georgia Lewis continued to rear her. Though they had a tempestuous relationship, Rae felt it was only fair to tell Georgia the news before she learned about it elsewhere. At the end of the conversation, Lewis-Thornton wasn't certain how well her mother had processed the information. But that uncertainty wouldn't last long.
"Two weeks later, my mama called me and said, 'See bitch, I told you if you wasn't no whore, you wouldn't have AIDS."
But most of those who read the account of Lewis-Thornton's life were grateful, not critical.

(To hear view excerpts from George Curry's interview with Rae Lewis-Thornton and other AIDS activists, visit www.youtube.com/blackaidsmedia  This series is made available as part of NNPA's support of Act Against AIDS and the Black AIDS Media Partnership's Greater Than AIDS campaign.)