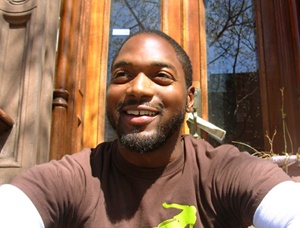 A brilliant young leader from Oakland, Calif. in the local, sustainable food movement, Bryant Terry, is coming to the King Farmer's Market and the Portland Farmer's Market at Portland State University for events with adults and youth Aug. 29 and 30.
Terry, described at as "eco chef," hosts cooking demonstrations featuring recipes from his newest cookbook, "Vegan Soul Kitchen: Fresh, Healthy, and Creative African-American Cuisine," at the Portland Farmer's Market at Portland State University from 10 a.m. - to noon Saturday, Aug. 29. He will also appear on the Chef in the Market stage for a cooking demonstration.
The following day, Sunday Aug. 30, Bryant host an educational event to enable local kids experience nutritious food at the new Sunday King Market in N/NE Portland on Aug. 30.
As a child growing up in Memphis, Tenn., Bryant Terry's grandparents inspired him to grow, prepare and appreciate good food.
He has spent the last nine years working to build a more just and sustainable food system and uses cooking as a

tool to illuminate the intersections between poverty, structural racism, and food insecurity.
Terry is a fellow of the Food and Society Policy Fellows Program of the W.K. Kellogg Foundation. He has received the Natural Gourmet Institute Award for Excellence in Health-Supportive Food Education in addition to being chosen by San Francisco's 7x7 magazine as one of the area's "Hot 20 Under 40."
In 2002 he founded b-healthy! (Build Healthy Eating and Lifestyles to Help Youth), a multi-year initiative designed to empower youth to be active in creating a more just and sustainable food system. His first cookbook, coauthored with Anna Lappé, was Grub: Ideas for an Urban Organic Kitchen, which won the 2007 Nautilus Award for Social Change.
"We are thrilled to have Bryant Terry coming to meet local shoppers and food enthusiasts," said Ann Forsthoefel, executive director of Portland Farmers Market. "He is one of the bright stars in the healthy and sustainable food movement."
On Sunday, August 30 from 10 to 11 a.m. at the new King Sunday Market, Terry will take part in the city's first ever "Local Lunch Box" event for kids, at NE 7th and Wygant Streets between NE Alberta and Prescott.
Young participants can take part in a market scavenger hunt to learn more about good versus bad food choices, learn about a day in the life of a farmer, and experience fresh fruits and veggies.
Other planned activities include an opportunity for children to cook simple recipes similar to Portland Farmers Market Kids Cook classes, nutrition bingo, make-your-own lunch box, and a blind box produce game where children can identify fruits and veggies based on touch and smell.
Portland Farmers Market is asking parents/children who are interested to RSVP to the event by calling 503-241-0032 or emailing [email protected].