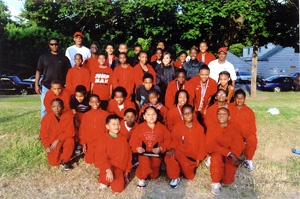 Allegiance Athletic Club javelin thrower, Kalaiza Mitchell, 10, took first place in turbo-jav at the Junior Olympics National Track and Field Championships in Greensboro, N.C. July 28-Aug. 2. The new national champion, Kalaiza beat out 43 other competitors from around the nation with a throw of 102-ft 11-in. last year she placed 9 th "She has been ranked number one all season and she just proved on an even bigger scale she is the best" says her mother, Collette Wallace. Portland, we have a National champion at only 10 years old -- she won the gold, this is a very big deal.
The Allegiance Athletic Club took 34 athletes to the Junior Olympics national games this year, out of a total of 75 who participate in the program - a stellar accomplishment.
Also winning honors is Clackamas High School junior Jordan Burkestrum, who took 5th in the 400 and is now ranked fifth in the nation.
To help support the Allegiance Athletic Club&rsquo's efforts, write them at P.O. Box 11907, Portland, 97211, or call Coach James J. Johnson at 503-290-4121.