Thousands of anti-war protesters took to the streets in Portland and around the world last weekend, marking the third anniversary of the U.S.-led invasion of Iraq with demands that coalition troops leave immediately. 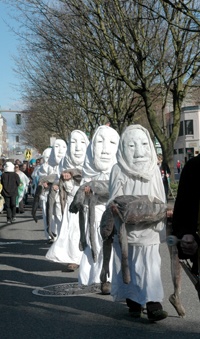 A crowd estimated to be in excess of 10,000 gathered in Tom McCall Waterfront Park Sunday to listen to a slate of speakers and then march along a winding route through downtown Portland. The crowd, a wide cross-section of ages, races and faiths, carried homemade signs, beat on drums and chanted to signify their opposition to the war.

The Rev. LeRoy Haynes of Allen Temple CME Church was among the speakers at the rally. Haynes drew connections between the alleged purpose of the Iraq War — establishing a democratic government in Iraq — and the erosion of civil liberties and voting rights that has taken place in the United States under the Bush administration.

"We will not give up our democracy to Bush and Cheney," Haynes said in his speech. "We say no to an administration who asks our sons and daughters to fight for democracy in a foreign nation while they steal it from us at home."

Haynes praised the energy and commitment of the marches, whose actions he said would create a ripple of change similar to that caused by Robert F. Kennedy's 1966 anti-apartheid speech in South Africa.

Only one arrest was made in what was otherwise a peaceful march. The Portland Police Bureau turned out in force, but there were no violent clashes between police and protestors. At one point, police on bicycles surrounded a group of masked and black-clad youth in the middle of West Burnside Street. The youth, members of the "Black Block" protest collective, claimed that the police were unfairly singling them out based upon their garb. The confrontation dissipated without incident, though, as police directed the other marchers around the knot of masked youth.

The scene in Portland was echoed across the globe over the weekend.

In New York City on Saturday, Wael Musfar of the Arab Muslim American Federation addressed more than 1,000 people who gathered in Times Square near a military recruiting station, which was guarded by police.

"We say enough hypocrisy, enough lies, our soldiers must come home now," Musfar said from a parked flatbed truck. Participants chanted, "Stop the U.S. war machine, from Iraq to Korea to the Philippines."

Many attendees emphasized that they support the troops. "I have friends in Iraq and I just want them to know that I may not be able to support them there, but I can here," said Jose Avila, 36.

"I support freeing Iraqis from tyranny," he said. "I came here to show there are Americans who support what Bush is doing in Iraq."

Protests also were held in Australia, Asia and Europe. In London, police said 15,000 people joined a march from Parliament and Big Ben to a rally in Trafalgar Square.

"We are against this war, both for religious reasons and on a humanitarian basis, too," said Imran Saghir, 25, a Muslim student who attended the London rally.

Britain, the United States' strongest supporter in the Iraq war, has about 8,000 troops in Iraq but plans to pull out 800 of them by May. The British military has reported 103 deaths there. More than 2,300 American troops have died.

In Washington, a protester wearing a President Bush mask and bearing fake blood on his hands waved to passing automobiles outside Vice President Dick Cheney's residence, where about 200 people demonstrated against the war.
The Rev. Graylan Scott Hagler of the Plymouth CongregationalUnited Church of Christ said the rallies nationwide are a "tapestry of resistance."

"Most people believe we aren't crazy anymore," he said.

In Concord, N.H., nearly 300 peace activists marched about a mile from a National Guard armory to the Statehouse.
"I feel a huge sense of betrayal that I went and risked my life for a lie," said Joseph Turcott, 26, a former Marine who served in the invasion.

At Dudley Square in Boston, a few hundred college-age protesters and baby boomers waved placards that read "Impeach Bush" and "Stop the War."

"It seems like we are fighting a King George in the same way General Washington fought a King George, who was equally imperialistic," said Askia Toure, a poet and activist.

Protesters in San Francisco danced in the streets, beat drums and carried signs that read "Stop U.S. Imperialism."
"It's very painful to me that our country is doing this and killing innocent people," said 70-year-old Joan Emerson, who attended with the group Old Lesbians Organizing for Change.

In Turkey, where opposition to the war cuts across all political stripes, about 3,000 protestersgatheredin Istanbul,policesaid. "Murderer USA," read a sign in Taksim Square.

In Stockholm, Sweden, about 1,000 demonstrators gathered for a rally and march to the U.S. Embassy. One protester was dressed as the hooded figure shown in an iconic photograph from the Abu Ghraib prison. "We do not need Abu Ghraib democracy, or Guantanamo Bay freedom," said Eftikar Hashem Alhusainy, addressing the rally.

— The Associated Press and The Skanner Staff