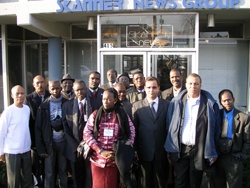 A delegation of activists, government officials and professionals from French-speaking Africa dropped by The Skanner's offices in North Portland March 20 to discuss the role of investigative journalism in transparent societies. While the group -- whose visit was sponsored by the U.S. Department of State and facilitated by the World Affairs Council of Oregon -- was forced to cut its visit short due to a scheduling conflict, they nonetheless got to take a look around The Skanner's offices and hear about the paper's purpose and readership.


• From Benin: Mr. Jean B.O.R. Alladatin, vice chair of the Beninese Network for Nonviolent and Transparent Elections, a non-governmental organization.


• From Burundi: Mr. Melchiade Nzopfabarushe, deputy chief of staff, Office of the Presidency.


Each year, 4,500 foreign visitors identified by United States embassies as the future leaders in their countries, participate in U.S. Department of State-sponsored study tours to the United States. The visitors, representing over 100 countries and a wide range of professional interests, meet Americans of different ages and backgrounds, and learn about the traditions and ideas which characterize the United States and make it unique.


Each visitor spends approximately 22 days in the country and visits 4 or 5 different states. Nearly 500 visitors come to Oregon each year. The World Affairs Council of Oregon arranges personalized itineraries for each visitor including professional meetings, sightseeing tours and home hospitality. This person-to-person program builds international friendships and promotes international understanding.