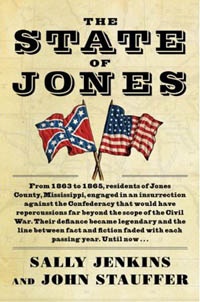 ELLISVILLE, Miss. (AP) - Newton Knight still haunts the Piney Woods and swamps of southern Mississippi, 140 years after the Civil War.
Knight, subject of the new book "The State of Jones'' by journalist Sally Jenkins and Harvard University historian John Stauffer, remains an obscure Civil War figure. To the authors and some in Jones County where Knight led a campaign against the Confederacy, he's an American hero.
"Southern humanism is just a very overlooked subject in general,'' said Jenkins, a Washington Post sports writer. "It's not as romantic, it's not 'Gone With the Wind.' It's truer. What we really hope the book will do is rescue the reputation of an American patriot. History got turned on its head in a way. He's been treated historically as a traitor and an outlaw because he was as loyal to the United States as a man can be.''
To others, though, memories of him are best left in the swamp where he successfully mounted a campaign against Confederate soldiers. In these parts, being loyal to the Union during the Civil War doesn't always earn you a medal. Knight's legacy is occasionally debated in Jones County where he lived from 1829 until his death in 1922.
Most of his neighbors thought Knight had a nefarious background and some funny ideas.
"Some of his relatives certainly would make him a hero, but I think, generally, he was accepted as a scoundrel,'' said Barbara Knotts, a 76-year-old retired schoolteacher who is chairwoman of the Deason House committee, which oversees the historic building in Ellisville that was the scene of one of Knight's attacks. "Now listen, let me make this clear, there's a large Knight family in Jones County and he was only one man. The others were well respected members of the community.''
A yeoman farmer who lived near Ellisville and owned no slaves, Knight was conscripted into the Southern army. He eventually turned his back on the Confederacy and began his own campaign against the South as leader of a band of "unionists.'' He went on to start a large family with a freed slave and his descendants _ white and black _ count in the hundreds.
"It was the first civil rights movement and he was right in the middle of it,'' said Jim Kelly, a Knight cousin and historian who served as the authors' guide in Jones County.
Knight, a large man with startling eyes and a thick beard, gathered a group of fellow deserters. Since slaves were usually owned by the rich planter class, Knight and others like him felt they had no stake in a horrific war that left Mississippi in tatters for decades.
Laws passed to free the rich from military service and tax goods and crops produced by soldiers' impoverished families further inflamed Knight and his band.
So they fought back from 1863-65, using pine forests and swamps in what is now Laurel as shifting bases of operation. They were aided by runaway slaves freed by the Emancipation Proclamation but not by their masters, and had support of Union authorities (though Knight would later fail in his bid to win back wages for their service from the U.S. government).
They endeavored to create a "free state of Jones'' _ a government answering to the Union _ though there's no proof they ever succeeded. They did mount an insurgency, clearing the county and surrounding areas of Confederate soldiers. They cut supply lines, laid ambushes and made life miserable for the Confederacy in its own heartland.
"The woods and the swamps were just crawling with runaways and refugees and union soldiers or unionists or runaway slaves,'' Jenkins said. "What's amazing to me is the extent that people run into each other. I think the wartime landscape in Mississippi was fascinating. Things were in motion.''
Knight eventually took a former slave who helped him during the war as his second wife and started another family, siring white children with his legal wife, Serena, and children of mixed ancestry with Rachel. He lived with his black family much of his life after the war.
"He's in this hostile environment, across the color line _ the worst sin imaginable _ living openly and having children, posing in pictures with his African-American children and keeping up the fight, I mean all the way through,'' Kelly said. "In the 1880s ... he's still being politically active on the Republican side, which was the party of Lincoln, which was the party committed to equal rights and black suffrage. That to me is just almost hard to imagine how he had the strength to do that and the courage to do that.''
While Knight was on the war's winning side, he remained in enemy territory. What soldiers, assassins and local toughs couldn't do, Southern pride and the "Lost Cause'' finally did, Kelly said.
"They pulled back some of the big armies, but now the white insurgency begins to kind of overturn the results of the Civil War and you could say that they did, at least for 100 years,'' he said. "I grew up thinking all white Southerners were for the Confederacy and that's just not true.''
She says much of the Knight story is "folklore,'' and points to a book by Knight's son, Tom, that says there was never a free state of Jones.
"I think Northerners are trying to put more into this than there actually is,'' she said. "It's folklore, is what it is. And we accept it as that.''