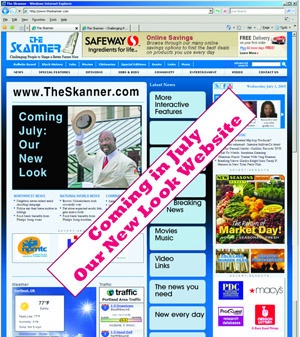 For years, Evelyn Murray had been looking for the proper greeting card for her multiracial family. After years of searching, she said it was nearly impossible to find a card that featured a Black and White couple.
So she decided to make her own.
The opportunity for Murray came at the beginning of our current economic meltdown. Despite a long history in technical support for phone companies, Murray lost her job. Now in her 50s, Murray says it's been difficult even getting interviews. She says it's because of her age.
"I'm too young for social security but too old to get hired," she told The Skanner.
As her period of unemployment stretched on, benefits ran out. Bills went unpaid, forcing her out of her apartment into her daughter's. She lost her car after it was towed and she was unable to afford the impound fee.
"I literally had to start all over again," she said.
Then she began to look inward for inspiration. And she found it where she always had – in family, in God and in love.
"My great-grandfather was White," she said. And her grandfather, although a Black man, could pass for a Caucasian.
"The word race is one of the biggest psychological forces they use to keep the masses in control," she said. "There's only one race on the human planet and that's the human race.
With eight children and 21 grandchildren, Murray gets passionate and a bit philosophical about how people perceive race as an impediment to a relationship.
"It's not about color, it's not about race, it's about ignorant people and a lack of love," she said.
With more time on her hands than she had when working for telephone companies, Murray began experimenting with a longtime goal – her own greeting cards. Using her own family as models, she selected several images that would be among the first to hit mailboxes.
"I'm using the Orville Redenbacher sales model," she said.
Going door to door around Northeast Portland, Murray is plying her cards much like the popcorn icon first distributed his snacks. She said she's encountered a number of parents and grandparents with mixed-race children and grandchildren who were ecstatic about finding the cards.
"There was a White man, with a southern accent, who said, 'I've never been able to find a card for my wife.' His wife is Black," Murray said.
In addition to going door to door, she has her cards in 12 locations around town and she has a personal business website. But growing her business hasn't been easy. It's been a step-by-step process.
"One week I bought a registry, the next week I bought a business license, the next I bought a domain, and the week after I bought the insurance for the e-commerce," she said.
By distributing her cards in more places, she hopes it not only gives multicultural families a greeting card that reflects them, but a window into a world that is still fairly taboo for many people.
Visit Evelyn's Ordinaty People Greeting Cards at www.evelynsgreetingcards.com to look at a preliminary gallery of available cards and store locations.