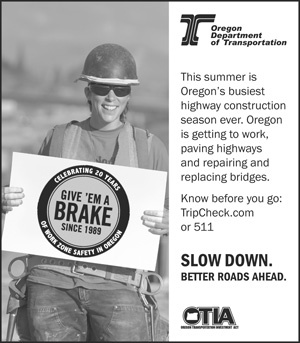 This year's 4th Annual Day of Re-Tilling the Soil, Saturday July 11, is the biggest ever, with three neighborhood cleanups, a basketball tournament, book giveaway and free party at Irving Park.
The clean-ups this year start with free breakfast at 8:15 a.m. at the Maple Mallory Apartments, 3720 NE Mallory Ave.; Jefferson High School, 5210 N. Kerby Ave.; and Cornerstone Community Church, 2216 NE Killingsworth St.
The Z-Tournament, named in honor of deceased Portland Police Officer Mark Zylawy, runs from 9 a.m. to 5 p.m. at Irving Park, NE 7th and Fremont Street.
The competition features one age bracket of eight teams of fifth and sixth graders, and a second bracket of seventh and eighth graders.
To sign up for the tournament call 503-839-1701, or 503-839-8676.
The book giveaway and party are at noon, with hamburgers and more, at Irving Park.
Organizer Larry Collins says he never dreamed that the annual clean-up event he started years ago would grow so big, and involve so many individuals and agencies.
"We're just excited because each year we're getting bigger and bigger and we don't want to do too many things, we want to do a couple good things in a very big way," he said. "So people have started giving of their time, giving of themselves, becoming unified."
Zylawy, who died in a traffic accident on his way to work in January, 2008, was one of the most respected officers in the Portland Police Bureau, with many friends in the Northeast Precinct where he worked for almost 17 years.
Said to have earned the respect even of the individuals he arrested, his memorial service was held at the Maple Mallory Apartments even though he lived in Vancouver.
He was known affectionately to all as "Z-Man."
Also in his honor, the Portland Police Bureau this week bestowed four full "Z-Man" scholarships for students at De La Salle North Catholic High School.
Collins, the founder of People of Purpose and Associates, says he and the other event organizers this year decided to make literacy a central feature, right next to basketball.
"We're not just having a tournament – there's a reason behind this, he said. "We're trying to deal with illiteracy, or people who can't read, and so we're asking people to bring a book to Irving Park."
He said the group is looking for donations of any kind of books in good condition, from children's to teens and adult books.
The noon party includes prizes and giveaways, hamburgers and hotdogs, community awards, and live music by  Linda Hornbuckle is committed to singing, The Light gospel group, Andy Stokes, Eric William, and Coo Breeze.
"We're looking for volunteers to come out and help us on this event as they're retilling the soil," Collins said. "Our motto there is stop pointing a finger and lend a hand."
For more information about Officer Mark Zylawy and the Z-Man Scholarship, go to www.zmanscholarship.com.
To volunteer at Re-Tilling the Soil, call 503-839-8676.