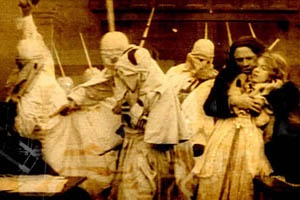 Listen, if it's okay in the world of pop music for DJs to remix snippets of classic songs in order to rap over them, why shouldn't a hip-hop era filmmaker be able to do the same thing with an old movie, especially if its copyright is expired and its now part of the public domain?  That's precisely what we're dealing with in the case of "Rebirth of a Nation," a sophisticated overhaul of D.W. Griffith's "Birth of a Nation."
That controversial silent flick from 1915 is frequently credited with setting the tone for the persistence of lynchings and other forms of oppression and intimidation of blacks during the 20th century up until the triumph of the Civil Rights Movement.
Where the original movie was unabashedly racist, filmmaker Paul Miller, aka DJ Spooky, now cleverly turns that tribute to intolerance on its head by adding his own running commentary exposing Griffith's bigoted agenda. Spooky explains how he had manipulated reality via an array of images designed to distort the truth. For example, there's a Mammy in the movie still serving her master who calls a free African American arriving on the plantation "Black trash" before kicking him in the butt with, "Dem free [N-words] f'um de N'of sho' crazy."
Generally, Griffith depicted any Blacks who weren't subservient to Whites as savages in need of taming by any means necessary. Hence, his championing the Ku Klux Klan's coming to the defense of Caucasian females whom he suggested were suddenly damsels-in-distress due to lascivious emancipated Blacks celebrating the legalization of mixed marriages.
As augmented by DJ Spooky's rectifying voiceover, I found myself actually enjoying Griffith's creepy picture for the first time. Ironically, if this remix has a mild failing, it's in its subdued, ethereal soundtrack, which plays more like a Philip Glass modern classical score than the urban-oriented fare one might expect ala Puffy, Common, DMX or 50 Cent.
Can Spooky's version of "Gone with the Wind" be far behind, edited so that Rhett Butler and the rest of the Rebels get exactly what they deserve?

To see an excerpt from DJ Spooky's Rebirth of a Nation, visit: http://www.youtube.com/watch?v=3ljIq0lz0qY