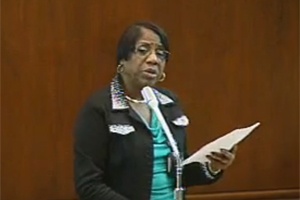 For the last five months of his life, Sam Sachs has spent more time advocating for the rights of minorities than ever before. He's cut out on work, showed up in Salem on a moment's notice and spent hours upon hours advocating for legislation that won't ever personally affect him.
Sachs was responsible for House Bill 3118, which requires institutes of higher education in Oregon to interview at least one minority candidate for a head coaching or athletic director position. The bill mirrors the NFL's "Rooney Rule" which has helped increase the number of minority coaches.
"It was a lot of work," he told The Skanner. "If I do it again, I'll try to make a career out of it."
The bill passed the Oregon Senate on Friday, June 19 unanimously and was carried by state Sen. Margaret Carter (at right in photo).
"While we may not have an NFL team yet, HB 3118 directs us to operate at the highest level of sports," Carter said.
The senate's version of the bill is now in concurrence with the House's, a technical step that matches up the different versions of the bill. The changes made in the senate include a tighter definition of "minority"; and an affirmative defense for schools that are unable to find qualified minority candidates to interview for open positions. The governor intends on signing the bill, according to Jillian Schoene, a spokesperson from his office.
Although the bill initially gained detractors, the lack of racial quotas and the bill's attempts at basic fairness turned many into supporters. State Sen. Mark Hass, a Democrat representing Beaverton, said he was initially against the bill.
"I talked to college coaches who were well known and minorities who were not so well known," he said. "Eventually, I came to the conclusion of the indisputable fact that guys who look like me should never pass judgment on the barriers minorities face in hiring. My skin color never kept me out of a job interview, but not everyone can say that."
The bill's citizen sponsor, Sachs, who is White, played college football for Western Oregon University. He also majored in Black Studies from Portland State.
When PSU failed to interview a single minority candidate before hiring Head Coach Jerry Glanville – a job listing that opened and closed within three days – Sachs had found his proverbial straw that broke the camel's back.
"Had they interviewed one minority candidate when they hired Glanville, I never would have been so motivated to do this," he said.
With Oregon under his belt, Sachs says he hopes to start a nationwide trend. Through contacts he's made with the NCAA, he hopes to formulate policy changes that could see more minority coaches across the nation.
To watch the video of the unanimous Oregon State Senate vote, visit http://www.youtube.com/watch?v=dBTuaFlfM6w.