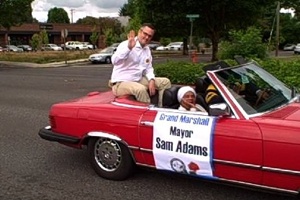 Mayor Sam Adams has been exonerated by Oregon Attorney General John Kroger's investigation into an alleged affair between Adams and a teenaged boy four years ago.
"I made mistakes in my personal life that led to this investigation," Adams said in a statement Monday afternoon. "As a result, the city I love was put through an ordeal. I am gratified the investigation has been completed, and I want to reiterate that I am sorry."

Department of Justice investigators, in a report released Monday morning, found that former state legislative teen intern Beau Breedlove's sex claims could not be substantiated and that he in fact was the source of the original "affair" rumors picked up and investigated by local weekly newspapers. For the full report, visit http://www.doj.state.or.us/releases/pdf/adams_investigation_report.pdf.
"In addition, Breedlove's prior inconsistent statements, financial gain, and prior felony conviction for a crime involving deception has compromised his credibility as a witness," the report said.
Adams was also exonerated on allegations of official misconduct in a staff hiring decision, misuse of government resources and "theft by deception."
In each allegation, the Justice Department determined that there was insufficient evidence to file criminal charges.
On the charge of misuse of government resources, the attorney general found that Adams could potentially have been in violation of Oregon statutes prohibiting misuse of government resources in deploying paid staff to help him cover up the Breedlove incident.
The charge stemmed from an "after hours" interview Adams held with Willamette Week in which two of his staff members were present.
"Adams has acknowledged that he in this interview he did make false statements about his relationship with Breedlove," the attorney general's report says.
However the two staffers, former press secretary Wade Nkrumah and policy advisor Amy Ruiz, testified they "volunteered to be present and were not directed to do so by Adams."
"Again, other than the fact that this interview occurred on city property, DOJ has obtained no evidence that Adams used significant government resources to disseminate false or misleading information," investigators concluded.
Department of Justice investigation included interviews with 57 witnesses, examination of cell phone records for Breedlove and Adams, and forensic examinations of the two men's cell phones and three of the mayor's computers, as well as "voluminous City Hall records," campaign brochures and other items.