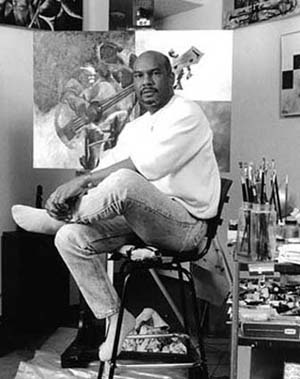 Philemon Timothy Reid, who was recently awarded a 2009 Lifetime Achievement Award from North Portland's Interstate Firehouse Cultural Center, died Tuesday. He was 63, less than a month shy of his 64th birthday.
Reid's love for blues and jazz, particularly musicians John Coltrane, Miles Davis and singers Ella Fitzgerald and Nancy Wilson, was reflected in his colorful paintings and sculptures. Although Reid's only formal art training was in high school, he developed his own unique style that was heavily influenced by Cubism and the artist Picasso.
"Philemon is part of an artistic movement that took hold in the 1970s that laid the foundation for Portland's creative identity today," according to Adrienne Flagg, creative director of North Portland's Interstate Firehouse Cultural Center, where Reid's art is prominently displayed. The IFCC's dance studio exclusively showcases his early work.
"He was an inspiration and a comfort to me when I began curating the IFCC Gallery in 2005," Flagg says. "Each piece of his became a guide, a friend and an inspiration for my work here."
Reid's art, at www.philreidart.com, has been featured in numerous art shows and exhibits in the region, from Newberg to Portland to Vancouver and around the country. His work is currently on exhibit at Aurora Gallery in Vancouver, Wash.
Reid's art will also featured in IFCC's upcoming production of "Sherman," a jazz opera commissioned to jazz trumpeter Thara Memory, with the libretto written by former award-winning Oregonian columnist S. Renee Mitchell.
Reid was born on July 1, 1945, in Eatonton, Ga. He became interested in art at a very young age and art was a part of his life ever since. There was a time when art was set aside for nine years while he served in the military. After his enlistment ended, he attended college at night and worked for many years as an engineering technician for the Bonneville Power Administration until he retired in 2001.
Reid was a full-time artist at the time of his passing. His inspiration would flow from the moods and feelings he experienced while listening to jazz music. He often rendered a subject in pen and ink as well as in oil, his two favorite mediums. Every day he continued to study and produce artwork while reaching for newer dimensions. He recently had begun sculpting.
Reid is survived by his wife, Marion Parris Reid (Vancouver); son Philemon T. Reid II (Bowie, Md.); daughters, Chantel Reid Marks (Vancouver) and Afi Nsombi Reid (Portland);  mother Mamie E.P. Chester (Miami); brothers Bob Reid (Los Angeles), Robert C. Chester (Hixson, Tenn.), Cedric Lee Chester (Las Vegas) and Melvin Ingram (Chesapeake, Va.); and sisters Mamie Elaine Horn (Hampton, Ga.), Elena Perk Chester (Miami), Glenda Sams and Barbara Ingram.
Reid is preceded in death by his father Willie Rufus Ingram, and stepfather Robert C. Chester Sr.
Reid's memorial services were June 16 at Tigard Covenant Church in Tigard. A "Philemon Reid Memorial Fund" has been established to help the family pay for Reid's medical expenses. Donations can be made at any Wells Fargo Bank branch.