Microsoft Honored for Diversity in Hiring

On the 45th anniversary of the historic Civil Rights Act of 1964, the Lawyers' Committee for Civil Rights Under Law has honored Microsoft Corporation for excellence in diversity at its 10th Annual A. Leon Higginbotham Award Dinner in New York June 3.
"Microsoft is receiving the Higginbotham award for its commitment to diversity and inclusion as part of the daily business function within every area of the company," says Barbara Arnwine, executive director of the Lawyers' Committee. The Lawyers' Committee is a nonpartisan, non-profit organization that strives to obtain equal opportunity for racial and ethnic minorities.
"They are also being honored for their stellar commitment to pro bono legal work," she said.
One such pro bono project recognized by the Lawyers' Committee includes the "pay for performance" approach, which was launched by Microsoft to enhance diversity in the legal profession.
The Higginbotham award is named in memory of Chief Judge A. Leon Higginbotham, Jr., a civil rights advocate, author and federal appeals court judge. The award recognizes exemplary corporate leadership with respect to advancing equal opportunity, particularly leadership in recruiting, retaining and promoting minorities.
Past honorees include Earl Graves Sr., founder and publisher of Black Enterprise magazine; The New York Times Company and its CEO Arthur Schulzberger, Jr.; and Ronald A. Williams, chairman and CEO of Aetna Inc. 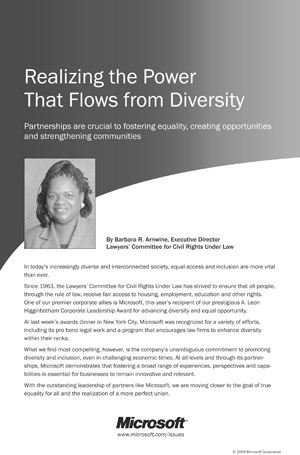 According to Arnwine, Microsoft is distinguished from past honorees because of their internationally renowned corporate diversity mission and for inspiring law firms to demonstrate the same commitment. They were also the first and largest technology company honored.
"This award is particularly important as Microsoft strives to be the global leader in attracting diverse talent to careers in technology," said Gwen Houston, director of global diversity and inclusion for Microsoft. "We hope to provide an inclusive work environment where they can succeed."
Microsoft's aspiration to attract a diverse and talented company network among under-represented groups, youth and women involves partnering with several organizations including the National Urban League, the Women's Business Enterprise National Council, the Minority Business Development Agency, the National Society of Black Engineers and the National Black MBA Association.
"We invest hundreds of millions of dollars in dedicated outreach to attract minorities and women to high-tech careers," said Houston.
She said this includes grants, scholarships, event sponsorships and partnerships with universities, such as Howard and Xavier Universities, and organizations that serve minorities and women, such as the United Negro College Fund.
Besides attracting diverse talent to careers in technology, Microsoft focuses on distributing investments into underserved communities through the minority investment program, which was launched in 2000.
The company conducted research with the Urban League that revealed minority-owned businesses have a lack of resources to adopt and implement information technologies for business functions. Therefore, the diversity investment program focuses on increasing funding options for businesses historically limited by lack of capital.
According to Microsoft's website, the corporation has $50 million of unsecured deposits in minority-owned banks and direct more than $1 billion of investment business volume to minority-owned brokers and asset managers.
"This award just confirms that [anyone] can benefit from Judge Higginbotham's vision of a more fair and just legal system," said Professor Charles J. Olgetree, Jr., of Harvard Law School. "I think he would be smiling down with great joy to see that a corporate giant is seeing the importance of delivering racial equality."
Higginbotham dedicated his life's work to racial and social justice, all while breaking racial barriers on a national and international scale. His work in the legal profession centered on voting rights, civil rights and employee discrimination.