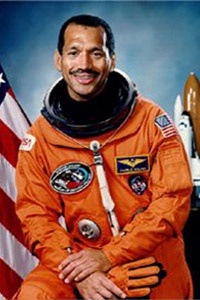 The White House has ordered a complete outside review of NASA's manned space program, including plans to return astronauts to the moon.

Bolden flew in space four times -- twice as shuttle commander - and once was assistant deputy administrator at NASA headquarters in Washington. The 62-year-old Columbia, S.C., native left NASA in 1994.

If the Senate confirms Bolden, he would be the space agency's first Black administrator and the second astronaut to hold the post.
Obama also announced that he was nominating Lori Garver to be NASA's deputy administrator. Garver was Obama's NASA transition chief and is a former associate administrator at the agency.

"These talented individuals will help put NASA on course to boldly push the boundaries of science, aeronautics and exploration in the 21st century and ensure the long-term vibrancy of America's space program,'' Obama said in a statement.

White House science adviser John Holdren said in early May that the new panel will look at the design of new spacecraft to replace the space shuttle and go to the moon, as well as consider possible alternatives to the current design.

Also to be studied is the five-year gap between the shuttle's retirement and the new moon vehicles, with the first new space capsule flying in 2015. During that time, starting in late 2010, NASA would have to rely on the Russians for space travel. The review will look at extending NASA's use of the multibillion-dollar international space station beyond 2016.

NASA has spent $6.9 billion on its plan to return to the moon, which then-President George W. Bush presented as a response to the 2003 space shuttle Columbia accident.