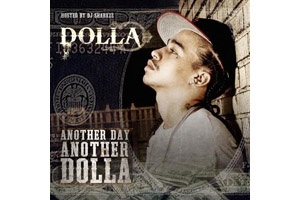 LOS ANGELES (AP) _ Up-and-coming rapper Dolla was killed in a shooting at an upscale shopping mall, and a man was arrested for investigation of murder, police said Tuesday.
Los Angeles County Coroner's spokesman Ed Winter said the man killed Monday afternoon at the Beverly Center was 21-year-old Roderick Anthony Burton II, the birth name of rapper Dolla.
Police said in a statement Tuesday that 23-year-old Aubrey Louis Berry of Georgia was arrested at Los Angeles International Airport with a gun Monday night. His bail was set at $1 million.
Burton was shot several times in a parking structure at the Beverly Center, and was later declared dead at a hospital, police said.
Burton's publicist, Sue Vannasing, told the Los Angeles Times that the rapper was waiting at a valet stand  with Rapper DJ Shabazz after a shopping trip when he was shot.
Police said Berry was found hours later in a ticketing area of Los Angeles International Airport. He was believed to have dropped off a rental car before he was found, said airport police Sgt. Jim Holcomb.
"As the officers approached the suspect, they asked him 'Do you know why we're here?''' Holcomb told The Associated Press. "He put his (hands) up in the air and said, 'Yes, I've got a gun in my waistband. Don't shoot me.'''
Airport police recovered a loaded 9mm semiautomatic handgun and turned Berry over to Los Angeles police.
Burton, a protege of hip-hop artist Akon, worked on the soundtrack for the 2006 dance film "Step Up'' and recently released two singles with Akon: "Like This'' and "She So Fine.''
His MySpace page said he once modeled for Diddy's Sean John clothing line and was signed to Jive and Elektra record labels. A media contact listed on the MySpace page did not immediately return an e-mail seeking comment.
Burton was working on his second album, "A Dolla and a Dream,'' which was due to be released on Akon's Konvict Muzik label. A song with T-Pain was titled "Who in the (Expletive) Is That?''
On one of his songs, "Rainy Nights,'' Burton seemed to foreshadow his own death: "Papa died at 25 so he must have been great, they say the good die young, I guess I'm on my way.''