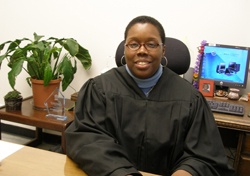 Circuit Court Judge Adrienne Nelson bends over the stub of a plant with just one hardy leaf. Worried about its welfare, she gives it some water and moves it from the window in her Multnomah County Courthouse office to the coffee table near her desk.


"This one probably got too hot," she says. Then, a healthier African violet comes to her attention, as well as another gangly plant.


"This one stayed mad at my other place the whole time. It would grow up, but it wouldn't grow up well," she adds.
Nelson, who recently was appointed Multnomah County Circuit Court Judge by Gov. Ted Kulongoski, talks about her plants as she would talk about her former clients — as a Multnomah County defense attorney, as an attorney at Portland State University or in her family law work at a local private firm.


Appointed on her 39th birthday, Feb. 17, Nelson will replace Judge Sydney Galton, who retired in October. Although she officially will be given her judge's robe during her investiture at 4 p.m. Thursday, March 23, in PSU's Smith Memorial Student Union Ballroom, Nelson already has presided over several probation violation hearings. She will use her combined civil and criminal experience to rule on arraignments.


One of those scheduled to speak at her investiture is Katherine O'Neil, an attorney and arbitrator, who became Nelson's mentor when she first joined the Oregon State Bar.


O'Neil calls Nelson a "natural leader" who is "highly motivated to bringing justice to everyone."


Nelson is an effective litigant in the courtroom who has developed a broad range of skills, O'Neil added. Her quick appointment to the bench was due to her reputation for excellence.


"A long time ago I made the promise I would always live close to my mother," Nelson said. "When I was a child, I lived near my great grandmothers and my grandparents. We were part of each others' lives. I was my mother's oldest, I had her first grandchild."


But when Nelson and her daughter, Taylor Browne, moved to Portland in 1994, Nelson was surprised that there were fewer than 75 African American attorneys in Oregon. It was a huge difference than in Austin, where several hundred of the 1,500 law students were African American.


"But then, moving to Oregon in general was a shock because it is so homogenous," Nelson added.


Nelson thought it was important for people to see an African American attorney involved in legal and civic activities. She wanted criminal litigation experience, so she went to work for Multnomah Defenders, a nonprofit criminal indigent defense law firm in Portland. There, she acted on her belief that everyone is entitled to justice, no matter their race or their income.


Nelson also came to know her peers through the Association of Oregon Black Lawyers, where she met some "dynamic" attorneys who guided her through the state's justice system. She also met Robinson and Deiz at that time, and both judges would call her periodically and check in on her. They also encouraged her to set her sights on becoming a judge.


When she started work at Bennett, Hartman, Morris and Kaplan, LLP, a civil law firm in Portland, Deiz called her and invited her to lunch. The judge arrived at Nelson's office early, surprising the young attorney.


"She said, 'I came early on purpose because it's important that we give back to the newer attorneys. It's important to have a support system. I wanted those working here to know that you know me.' "


Deiz, said Nelson, was a "trail blazer" for African Americans in the justice system.


At Bennett, Hartman, Nelson focused on family law, which she called a "great experience."


Later, Nelson landed at Portland State University, where she was in charge of the Student Legal and Mediation Service. There, she worked with another attorney and two law school students to represent PSU students in uncontested cases, such as preparing the paperwork for divorces, wills and guardianships. She also acted as a mediator.


"I had come full circle," Nelson said. I started with criminal defense, civil work and I did mediation."


During her career, however, Nelson has been active in local organizations, as well, including being the president of the Oregon Law Foundation and of the Queen's Bench, which is the Portland chapter of the Oregon Women Lawyers. She is a leader in the American Bar Association, where she focuses on the minority caucus.


"It's a very life-changing class for most students," she said. "It's very interactive. They experience the whole emotional gamut."


Students — many of whom are of different races or are biracial — have told her that she has helped them change how they think about the law and each other.


"I try to challenge students to think outside the box; it's not a traditional class," she said. "I want them to learn how to develop their arguments — that's what part of lawyering is."


In 2003, Nelson received the Oregon Women Lawyers award named after one of her mentors, Judge Mercedes Deiz. The award is given to an individual who has made an outstanding contribution to promoting women and minorities in the legal profession and in the community.


She also received the Delta Sigma Theta Inc. Women of Excellence Award for leadership and service in 2003.
When Nelson sees a problem, she takes action. When she moved to Oregon and saw the lack of minorities in the legal profession, she decided to do something.